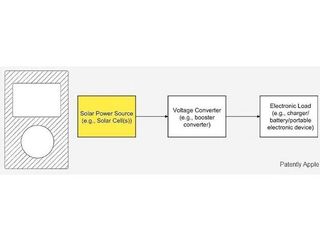 Apple has patented a system for a new technology that is able to provide power to portable devices using energy from the sun.

While solar-powered iPhones may be some years off, it's certainly an interesting idea and the fact that Apple has patented the portable solar tech shows that it is developing alternative ways of powering our phones and iPads in the future.

Apple's new patent for solar-powered portable devices hopefully suggests that we will no longer be tied to wired charging of our mobile devices in a few years time.

The future is bright

Apple's patent details ways of recharging the rechargeable batteries in a portable phone, laptop or tablet.

The key aspect of the new Apple patent is the power control circuit which sits between the solar cell and the device's battery.

This monitors the level of power being generated by the solar cell – which is dependent on the fickle nature of the sun (particularly fickle for British Apple fans!) – and converts it into a steady charge to power up your portable computer or phone.

It's early days and, of course, there is no official comment on the tech from Apple, but if this patent can be successfully developed into a commercial charging unit for your future iPhone or iPad, then it may well indicate a major step forward in eco-friendly charging tech.