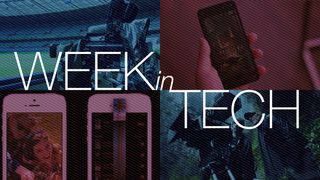 In years to come, we'll tell our children that Amazon wasn't always the only company on earth - and they'll laugh at us, and make goofy faces when they think we're not looking. Jeff Bezos's latest step towards total world domination is an Amazon-powered phone, but is it good enough to rival iPhone 6? And will there even be a Nexus 6 for it to face off against? If only there was a fact-filled weekly missive that could answer those questions and more. Hang on! There is! It's here! It's Week in Tech!

We've had Fire tablets. We've had Fire TV. Guess what Amazon's new smartphone is called? It's the Amazon Fire Phone. The key USP leaked ages ago - we knew it would use multiple cameras and head tracking to create a glasses-free 3D interface, which so far seems limited to interesting lock screens and some fun map-related tomfoolery.

But the Fire also includes Firefly, a camera- and mic-based recognition system that's designed to let you scan or listen to anything in the world and immediately buy it on Amazon. You can see why Amazon might want that. Will potential smartphone buyers? We suspect that depends on whether developers embrace the SDK to make their own Firefly-enabled services.

The closer we get to the iPhone 6 launch, the more the leaks move from "unlikely and probably entirely made up" to "man, Tim Cook's going to be annoyed by that one." The rumoured sapphire displays are indeed coming, it seems, but they're only coming to the larger, 5.5-inch iPhone 6; the 4.7-incher is getting Gorilla Glass and a significantly lower price tag. The ETA is still September.

It's the battle of the century, a genuine clash of the titans. In the red corner it's Snapchat, king of messaging in this crazy mixed-up world of ours. In the blue, Facebook, everybody's favourite potentially Orwellian social network with its new Slingshot app. The battle? Social image sharing. As Nick Pino explains, Facebook wants to "shoot Snapchat out of the sky" - but Snapchat is a moving target.

How's that "don't be evil" thing working out?

"Nice fanbase you've got there, Google appears to be saying. Shame if something happened to it." That's Gary Marshall's interpretation of the spat between Google and indie record labels, with the big G threatening to boot them off YouTube if they don't agree to join its imminent streaming music service. With both Google and Amazon playing hardball with suppliers, Marshall fears "streaming firms refusing to carry particular artists' products if they don't do what the streaming service says… Fancy being held to ransom by Jeff Bezos or Sergey Brin?"

3D has something of a mixed reputation, largely because it's often rubbish - so hurrah for IMAX, which promises to revolutionise 3D and provide "a thrill ride that audiences haven't seen before." The secret? A fabby new 65mm 4K 3D camera that promises to transform 3D movie making. You'll be able to see the first results in Transformers: Age of Extinction, although sadly the camera can't do anything to improve scripts.

Football - the saviour of TV?

Good news for footie fans and and haters alike: the World Cup is helping decide the very future of TV. Over to you, Gareth Beavis: from the first colour game in 1970, "the World Cup has been a constant proving ground for new technology that affect the way we watch TV every day." 4K World Cup footage will be delivered to retailers to help showcase the tech, and if that helps drive 4K adoption that will in turn encourage more 4K content. In the meantime, there's always 4K Breaking Bad on Netflix.

Let's all do the robot

Hands up who thought Nike had abandoned Android? Us too, so it's all the more surprising to see the arrival of a FuelBand app for Android 4.3 and above - a whole two years after the FuelBand first went on sale. If athletes took the same approach we'd still be waiting for the 2012 Olympics to finish.

Hands up who thinks LG will make the Nexus 6? LG's hand is conspicuous by its absence, because Google hasn't asked it to make the next-gen Nexus. That doesn't mean the Nexus 6 won't happen - as Hugh Langley points out, HTC is apparently making the Nexus 8 tablet, so Google may have given it the 6 too - but the Android Silver leaks do suggest that the Nexus's days may be numbered.