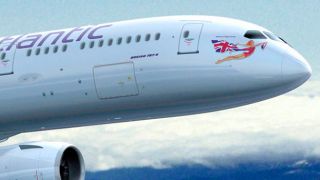 Virgin Atlantic passengers traveling between London and New York will soon be able to make calls on their smartphones during the flight, the airline has announced.

The company is fitting its new Airbus 330 jets with tech from AeroMobile (pretty self-explanatory company name isn't it?) making it the first UK airline to offer such a service.

Virgin will bring the tech to 17 of its planes on at least 10 different routes by the end of 2012, according to The Daily Telegraph.

As AeroMobile creates a mini network in the sky, passengers will be charged a roaming rate, akin to using your phone abroad to make calls.

Thankfully, the heightened cost will significantly reduce the chances of you being forced to listen to some bore nattering on about their problems or 'touching base' on business dealings for six hours.

Virgin's move follows the introduction of BA's transatlantic Wi-Fi and texting service on the same route.

Neither of the airlines allow connectivity during take-off and landing so you'll have to wait until you're 10,000ft in the air before you can make that "mum? Yeah, I'm flying!" phonecall.

There can also be no calls within 250 miles of US airspace, so be sure you finish up the call, promptly. You don't want to annoy the American air traffic controllers. They probably have big guns. Scary ones.