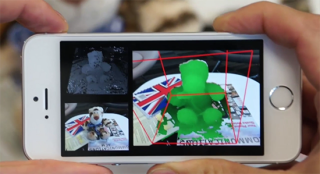 While Microsoft has been busy launching Windows 10, its research team has found a way to turn your phone's main camera into a 3D scanner.

Called MobileFusion, Microsoft says it can use a smartphone's rear camera - specifically, the RGB capabilities of the camera - to capture an object multiple times and from different angles, then build a 3D model automatically.

The tech is actually similar to an older project that the MobileFusion researchers had previously worked on, Kinect Fusion, which allowed users to use a Kinect camera to build 3D models of their homes, offices or even themselves.

"However, that system requires a PC and other gadgets, making it difficult to do any 3D scanning on the go," Microsoft Research said.

With MobileFusion, no additional hardware is required, and neither is an internet connection. What's more, the 3D model is said to be good enough for 3D printing.

"The great starting point was to take a sensor that everyone has in their pocket, which is the camera you have on your mobile phone," said Shahram Izadi, one of the project's lead researcher.

The research team also suggests that the 3D models from MobileFusion could be used for augmented reality as well.

While this doesn't say much, it does hint at the possible ability to use this type of tech for HoloLens applications in the future.

Interestingly, the tech isn't limited to just Windows phones, with the research team demonstrating MobileFusion on an iPhone 5S.

There are currently no plans for a public release, but Microsoft hopes to make it available eventually on iOS, Android and Windows Phone.

You can check it out in action in the video below: