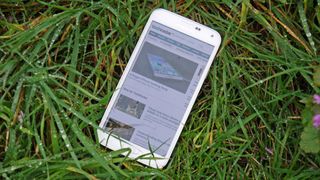 The Galaxy F might be beefier than the S5, but the dimensions look the same.

The Samsung Galaxy F has been doing the rounds a lot lately and the latest evidence for it is an appearance at the FCC.

The SM-G906S, G906K and G906L, all of which are believed to be variants of the Galaxy F, all passed through the Federal Communications Commission in the States.

The interesting thing though is that a diagram showing the dimensions of the handset was attached to the FCC filing.

According to the diagram the Galaxy F (aka Galaxy S5 Prime) measures 72.5 x 142mm, which would make it exactly the same width and height as the Samsung Galaxy S5.

That's not the first time we've heard the Galaxy F would be a similar size, in fact a previous rumour pointed to it being slightly smaller, but this is the most convincing piece of evidence yet regarding its size.

It's also slightly surprising given that the screen is rumoured to be 5.2 inches, which is marginally larger than the 5.1-inch Galaxy S5. Presumably this will be achieved by shrinking down the bezels.

Other than that the FCC filing doesn't tell us much but it's yet more evidence that the Galaxy F (or S5 Prime if you prefer) is real and on its way.