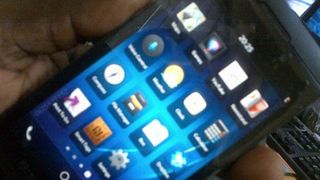 While RIM continues to hold off on an official launch for its new full-touchscreen BlackBerry 10 handset, the internet continues to hemorrhage purported photos of the device.

The much-anticipated BlackBerry L-Series handset, all-but-confirmed by RIM months ago, has apparently shown up in some new blurry-cam test shots picked up by the TechSuplex blog.

The images were initially posted to Twitter and have since been removed, but not before the pics speedily made the way across the internet like an acute dose of head lice at a primary school.

The latest shots (there are plenty more and more still) of the handset do not reveal all that much in the way of new information, but the new-style homescreen app icons are depicted.

Just last week the BlackBerry L-Series appeared in photos next to a current BlackBerry Bold smartphone, showing-off a stark contrast between the by-gone era at RIM and the one about to commence.

Currently, however, the Ghost of Christmas Present is played by a BlackBerry fan who still can't get his hands on BB10 device and is on the verge of ditching his old one.

RIM has pencilled in January 30 for the long-delayed BB10 launch, but by then will the company's chance at a Scrooge-esque redemption be nothing more than a fleeting dream?