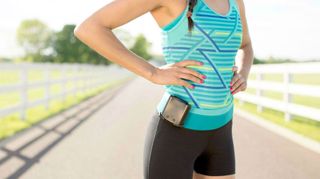 It's widely acknowledged that batteries have been holding mobile tech back. Since Volta invented them back in 1800, they've advanced quite a long way from a pile of copper, zinc and brine-soaked rags.

The first public mobile phone, 1973's Motorola DynaTAC prototype, had a battery life of 20 minutes - amazing for the time. That today's power-hungry devices last a day is a testament to two centuries of scientific advancement - but we want more.

To have a truly mobile smartphone experience we need a power source that goes wherever we do - and some engineers think that we are that source, Dr. Natasha Vita-More of the University of Advancing Technology telling us it should be "power that comes from the human body itself."

Imagine if there was a way we could just eat a little more or move more regularly and power those phones ourselves, our bodies literally becoming the power source… and it might not be as far off as you might think.

To find out more, we spoke to three people specialising in this area. They were: Dr Harry Zervos, Principal Analyst at IDTechEx, an expert in thermoelectric energy harvesting; Tom Snyder, from the North Carolina Regional Internet of Things (NC RIoT) centre, who has previously worked in a nanosystems engineering research centre; and the transhumanist Dr Natasha Vita-More, from the University of Advancing Technology.

There are already lots of on the market and plenty more insane concepts for them. These are essentially machines that convert your energetic actions into power, either directly or to be stored in a battery.

Kinetic chargers, machines that convert your movement into power, have been around almost as long as mobile phones. A good current model is the Eton FRX4, which combines a hand-cranked charger, battery and solar panel with a radio and flashlight. It works well generally, but who wants to be cranking a handle to charge an iPhone?

The newest concept is to capture energy passively, as you move. The Ampy is a battery pack containing two sensitive inductors, which capture vibrations from movement.

It contains enough charge for one and a half iPhone batteries, in our estimation, and is about the size of a deck of cards. An hour of exercise produces one hour of active smartphone battery life, or five hours on standby. It's currently available from the Ampy website for around $75.

Yes, wearable solar panels are totally a thing. They make look strange, but it's a rational way to capture power from the source. To make it easier, solar fibers are being developed which can be woven into all sorts of fabrics.

Indeed, these are already commercial. Brands like Tommy Hilfiger have experimented with wearable solar panels integrated into flagship products, like their Solar Powered Jacket, pictured above. Its removable solar panels are water resistant and the lightweight battery contains enough charge for four standard smartphones.

Why is solar so popular? Tom Snyder from NC RIoT explains. "Looking at energy output per unit cost, fossil fuels still rule, but they aren't environmentally feasible or practically applicable for portable electronics and the Internet of Things."

By which he means nobody wants to be carrying around large amounts of explosive fuel.

Snyder emphasises that solar power is now widely, cheaply available, and modern solar tech is efficient - that is, it converts a large amount of light to power.

"Solar has largely commoditized, so costs are nearing grid-scale practicality. Advances in non-silicon based solar will drive power output much higher than 20% efficiency (though at higher cost, so will be applicable for small devices instead of large scale power production)."

By contrast, Dr Harry Zervos is less enthusiastic; "High efficiency solar (e.g. GaAs cells) is one option, but it is very expensive, and does not work well if you're not holding it up to the sky in perfect California sunshine."

And you wouldn't want to be wearing that Tommy Hilfiger jacket in an L.A. summer...

Whereas the kinetic chargers we saw earlier drew current from your physical activity, newer technologies could power our phones just from our breathing or the movement of our clothing.

Piezoelectric materials (known as 'piezos') include a crystalline structure that generates a current when it's bent, pressed or subjected to other stress. Several research studies have experimented with 'piezos', including research that showed that a piezoelectric insole could generate enough power from walking to power 30 LEDs - around 50 milliwatts.

Other studies have implanted piezo fabrics around the lungs and hearts of animals to successfully (if gruesomely) generate power.

"Piezoelectrics hold considerable potential," says Snyder, "but they are still years from practical usage in consumer product applications. Piezos produce very high power outputs, but only for a really short duration, so in aggregate the efficiencies are still very low. These materials are fairly brittle, and often not well suited to larger scale application."

For example, Jess Jur at NC State is working on a low-cost solution to harvest energy from temperature differences across insulation. "[The] near term application [is] on steam pipes and industrial applications, but there's a promising opportunity to build similar devices for apparel. Health monitoring clothing is a holy grail that will be achieved in time."

Current page: Power from our own bodies