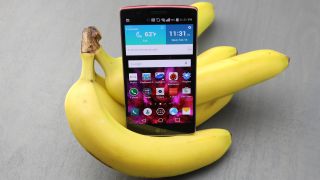 The G Flex 2 is just the beginning

Believe it or not, there was once a time where smartphone belonged in the realms of science fiction. But while they're getting more powerful all the time, their designs aren't radically changing.

Still, a few companies are experimenting in interesting ways, and LG has just patented a smartphone which folds up into a bracelet that you can wear on your wrist.

We suspect such a device is a long way off becoming a reality. For one thing, LG's patent reveals little about how such a thing would actually work, which suggests LG is in the very early stages of developing it.

There are certainly a lot of hurdles to overcome. The current crop of curved phones are at most only slightly flexible, while this requires a fully rollable screen and it's not just the screen that would need to be flexible, some of the phones internals likely would as well.

Even when it does become possible, we're not entirely sure it's a good idea. If smartwatches take off then surely everyone will have one by then, and if not it seems unlikely that people would be very open to wearing a phone on their wrist.

Still, we like innovation and we're intrigued to see if the idea plays out. Though LG isn't the only one with this idea, as a very similar patent was filed by Samsung not so long ago.

Samsung is also experimenting with curved screens so it makes sense that the two companies would arrive at similar ideas. The next - and more difficult - challenge is convincing us to wear them.