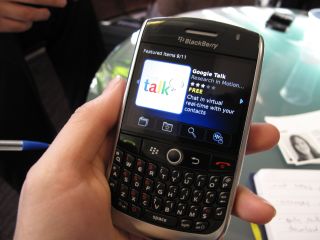 RIM has officially unveiled its BlackBerry App World, and the company was kind enough to come in and give TechRadar some hands-on time.

Available on all devices that run the 4.0 RIM software (basically, anything with a Pearl and the touch-screen Storm), BlackBerry App World brings a whole host of free and paid-for applications to the BlackBerry.

It's a sea change for BlackBerry users who no longer need to be jealous of the third-party wares that the likes of iPhone and Android users benefit from.

RIM told us that they will have a thousand apps available on the store by the end of the week, with developers desperate to code for the device.

Hands on with BlackBerry App World

The BlackBerry App World (BAW) front end can be downloaded from www.blackberry.com/appworld although some providers may put a link on home screens to tell users that the store has gone live.

The first screen that you come to is a 'Featured items' pane, which, as you would expect, gives a short list of the applications that RIM has picked out.

One nice touch that is immediately apparent is that everything in the store in region and device specific. You won't be getting touch-screen apps listed for your Curve, for instance, or a US-only app that is irrelevant to the UK market.

Moving into the Apps themselves, the mechanism is simple and quick – it's a familiar one for those that have used app stores on other devices, with the ability to rate or read reviews.

RIM has also included a quick 'recommend' option that allows you to ping your favourites through to contacts on the likes of Messenger, email or SMS.

There is also a contact support option which is monitored by RIM itself, and should add a little user confidence to proceedings.

For paid applications, the store uses PayPal's technology, and once you have signed up for a PayPal account it is both convenient and fast to use.

Paid-for applications should be compatible with future devices, can be uninstalled and reinstalled without triggering the need for new payments and should survive the move to another RIM device in the future.

The apps were priced more or less as you would expect, although some of them were very much in the pricey range, costing more than £10.

We took a look at the Bloomberg application – likely to be a popular free app, and it blended in beautifully to the BlackBerry look and feel.

There is also search functionality and the MyWorld setting which allows you to access all of your downloaded applications.

The vetting process is apparently much less rigorous than other app stores', but will ensure compatibility, security and suitability. We were told the vetting process for new applications should take around 10 days.

Developers will get 80 per cent of all profits, for paid apps, with RIM taking a 20 per cent slice.

Overall, it's a nice, well-designed and functional App store that will bring BlackBerry aficionados a massive amount of pleasure.