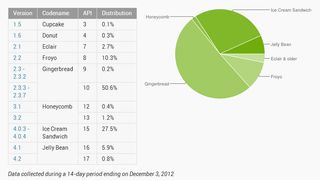 The majority of Android users are still living in the past

The latest breakdown of Android versions has turned up and it still doesn't make great reading for the Droid-loving community with over half of all devices running Gingerbread or lower.

The fragmentation of the Android platform has for some years been something that gloating Apple fans have merrily highlighted as one of the major failings of Google's mobile OS over the Cupertino firm's iOS offering.

Android Jelly Bean was launched back in June and since version 4.1 landed we've also seen 4.2 arrive, although the latest incarnation still only finds itself on 6.7 per cent of Android devices.

Even Android 4.0 Ice Cream Sandwich, which is now over a year old hasn't managed to climb into top spot, accounting for a relatively mediocre 27.5 per cent of the Android market.

It is Gingerbread though which is still stealing the Android show, with version 2.3.x of Google's famous OS still running on 50.8 per cent of devices – and that's two years after it was initially launched.

Gingerbread has seen a drop over the last few months, as it was claiming 57.7 per cent back in September, with Jelly Bean was languishing at 1.2 per cent.

So while the trend is slow growth towards the newer iterations of the Android platform, the tedious upgrade path means a vast number of users are still stuck on the older versions of the software.

This is something Apple users generally don't need to worry about – unless that is you have an iPhone 3G or first generation iPad.

From Android Developers via InToMobile