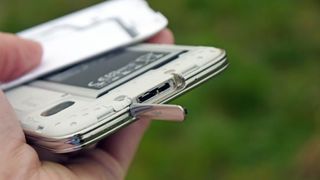 Battery life is the only real problem left to overcome in smartphones, as while screens and processors are improving every year battery technology isn't, which is why most handsets struggle to last much more than a day.

That could all change before too long though, as a new study published in the Nature science journal points to batteries which have the potential to offer five times the energy density of the lithium-ion units we're using currently.

This possibility is opened up by the development of lithium-oxygen batteries. These were previously hard to create because the lithium superoxide used by them was thermodynamically unstable.

However, it's been discovered that crystalline lithium superoxide can be stabilised in a battery by using a suitable graphene-based cathode.

Don't get too excited yet, as Larry Curtiss, one of the co-authors of the study, notes that "a lot more research is needed." But says that "this discovery really opens a pathway for the potential development of a new kind of battery."

This isn't the first new battery tech we've heard of, from a modest 40% boost in performance promised by future Sony batteries to week long life there's a lot of research happening.

But so far none of it is ready for commercial use and most of it looks to be years off. So the future might have a lot of juice, but for now you'd best keep track of your charger.