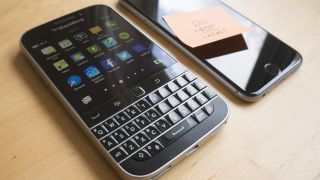 The usual narrative goes like this: an iPhone is great and a BlackBerry is rubbish. An iPhone the future, a BlackBerry the past. Contemporary simplicity versus outmoded clutter. New versus old. Cool versus lame.

So entrenched had this narrative become that it started to annoy me. The very universality of its acceptance irked, and so I proposed an experiment to TechRadar. I would lock my iPhone 6 away for a couple of weeks and use a BlackBerry Classic as my full-time smartphone to see for myself how much of this received wisdom was valid and how much was anything but wise.

I made a good candidate for this experiment because I've used every iPhone since the first generation as my main phones. (I was at its announcement in 2007, and the next day was ushered into a small room to try one; since it wouldn't ship for half a year after that, this made me very popular at the geekier social gatherings.)

I have also spent most of my professional career writing about Apple, most recently as editor-in-chief of TechRadar's sister titles, MacFormat and Mac|Life.

I am, in other words, an Apple user. But I'm not an Apple fanboy. I like and for the most part use Apple tech, but I can be excited about basically about any kind of technology. I can't really hope to convince you of my impartiality if you're determined to think I'm part of the iSheeple flock, but what follows is, as best as I can tell it, what happens when a technology enthusiast, whose smartphone has only ever been an iPhone, swaps his SIM into a BlackBerry Classic – the ultimate refinement of the device that was a smartphone before smartphones existed.

The hardware, make no mistake, is quite bewitching to hold. There is something hugely appealing to me about the tactility and overall physicality of this device. We use 'weighty' as an adjective to describe serious, high-level discussions, and that association subconsciously sparks when you hold the Classic; it's weighty and weighty.

And while the iPhone is a blank black slate, a wave-burnished rectilinear pebble in your hand with no texture save 'smooth', the BlackBerry is bristling with textures. The smooth screen, the scaly snakeskin feeling you get when you run your thumb over the keys, the dimpled back; even the edges, subtly chamfered in towards the front, register with your brain as a texture as you fiddle with it. It makes it altogether a more interesting artefact under my fingers than the iPhone, and frankly it looks more exciting to my eyes as well. More approachable, less enigmatic.

I'm not a fool; I know that the iPhone's blankness is why it's so powerful and flexible, but as a child of the eighties, the BlackBerry Classic looks how technology is supposed to. What sci-fi told me technology would look like. When I pick it up in a dim room and the screen springs to life and the keyboard glows with with rows of exciting buttons all ready to be pressed, the little boy inside me thrills at using what is very evidently a tiny computer. The iPhone never felt like using a tiny computer – which is a big part of its appeal – but the BlackBerry does, and there's a part of me, apparently, that is still tickled by this.

Much of that sense, presumably, comes from the fact that the trackpad under the screen fulfils the role of a mouse, and that you input text using that famous BlackBerry keyboard. Having always been perplexed by why BlackBerry fans love the keyboard so much – when I've usually found the iPhone's fast and accurate if you embrace autocorrect – I think I've worked it out. With the Classic's physical keyboard, even after only a couple of days, hitting a specific letter was (or at least, felt) more reliable.

The combination of physical and visual cues meant I was more likely to type an A when I wanted to type an A than on the iPhone. The kicker, though, is that I'm still wildly much faster on the iPhone overall, and I don't think it's solely familiarity. Partly, it's that while I might be a bit off with hitting the specific letter I want on the iPhone, the fuzzy logic of the autocorrect usually means that the keyboard eventually produces the word I meant.

This may explain why hardcore BlackBerry fans hate soft keyboards: they see high error rates when typing individual letters, but don't get far enough through the word to realise that the system has their back. But also, the keys require pressure. That's completely fine when you're 'two-thumbing it', walking along the street, but if you're just idly holding the Classic in one hand on the sofa and want to tap out a tweet, you have to move your finger to the key and then press, whereas with a touchscreen you pretty much just have to move your finger into place.

Plus, the Classic is wide, making it hard to reach never mind press the keys on the side opposite your thumb. And the clicking of the buttons, while barely perceptible most of the time is, as my wife will attest, quite definitely perceptible when in a quiet room such as a bedroom.

Generally, the whole experience of using the Classic was a positive one. It was eminently powerful enough to do everything I asked of it, and it would occasionally force me to confront my unconscious prejudices about BlackBerry; the camera, for example, was better than I was expecting, though I shouldn't have been expecting anything else other than competence from such a new device.

It could do most of the stuff I use a smartphone for – social media, email, snaps, music, calendaring, maps, Reddit, browsing and so on. Even so the Mac sync app felt very alien, and the experience was sometimes marred by inconsistent interactions and navigation. I never quite acclimatised to the universal inbox, the BlackBerry Hub, which brought together a deluge of notifications not only from email, SMS and BBM, but from the system-level integrations of Twitter, Facebook and LinkedIn.

Slowly, though, I realised that while most of the mild niggles were balanced out by the appeal of the hardware, there was one huge, looming issue: ecosystem.

Current page: My fortnight with a BlackBerry