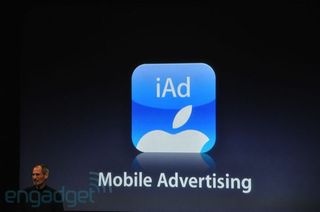 iAD coming to the UK's mobiles

Apple has announced that it is to bring its iAd mobile advertising service to the UK and France in December and will come to Germany in January.

Mobile phones are being seen as the next big thing in advertising, what with print declining and television advertising choked by the rise of the EPG and VoD.

Jobs and co have had success with iAd in the US and they now hope to emulate this in Europe.

Speaking about the service Andy Miller, vice president of iAd, said: "In just four months, we've doubled the number of advertisers on the network and thousands of developers now have a valuable new source of revenue."

Although there has been talk that some advertisers being put off with the tight controls Apple puts on them, the UK launch will see Unilever, L'Oréal, Renault and Absolute Radio use the service.

In September, figures showed that Apple's iAd service was closing in on the more established Google mobile ad sales, with both companies looking to own around 21 per cent of the mobile ad market by the end of the year.