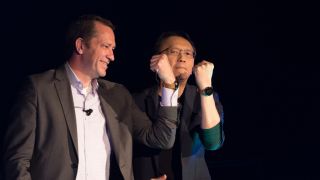 Acer unveiled a new smartwatch today, called Leap Ware. It's a sleek-looking circular wearable with a fitness focus, and while it's home to what sounds like a capable batch of sensors and promising battery life, it's missing one key thing.

This will likely turn away a number of potential buyers, but the Leap Ware doesn't want you to write it off just yet.

The smartwatch runs a MediaTek MT2523 chipset and MT2511 bio-sensing chip, picking up key stats like heart rate, stamina/fatigue levels and how much exposure you've had to ultraviolet rays, Acer says. Leap Ware, then, isn't just a pretty face.

The company, which also revealed a new line of Switch 2-in-1 laptops today, says Leap Ware's battery life is three to five days, an impressive feat for any smartwatch. We'll see how long it lasts in practice, but on paper it's a strong stat.

Leap Ware's face measures 42-mm (1.6 inches), putting it right in line with the larger Apple Watch, and is coated in Corning Gorilla Glass SR+, which will hopefully keep scratches at bay.

Acer's new watch bears a striking resemblance to the Pebble Time Round, which also features a circular face and slim profile. Unfortunately for the Round, it looked and felt good but sacrificed battery life and robust functionality in achieving its aesthetic. We'll see if the same holds true for Leap Ware.

With water resistance that can "survive an unexpected torrential downpour", Acer's watch should keep running even if splashed.

Two band colors are available – Navy Blue or Light Brown (ooo la la) – and you can swap the straps out as you like.

Last but not least, Leap Ware can be synced with an Android or iOS phone through Acer's Liquid Life app. This lets contact names pop up on the watch face when they ring you, and fitness data gathered from the watch will be displayed on your smartphone screen.

The Acer Leap Ware price is listed at $139 for North America, where it will go on sale in July. The smartwatch then heads to Europe, the Middle East and Asia in the third quarter of 2017 for €139. Customers in Taiwan can buy Leap Ware for NT$4,990 beginning in August.