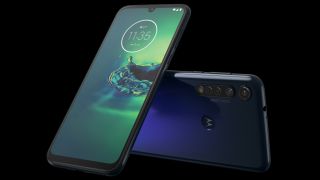 Motorola has had a busy day, as it has just launched not one but three new handsets, namely the Moto G8 Plus, Moto E6 Play and Motorola One Macro.

The Moto G8 Plus is perhaps the highlight, and certainly the highest priced at £239 / AU$499 (around $310). It has a triple-lens rear camera, with a 48MP main lens, an ultra-wide action cam (like the Motorola One Action), and a depth sensor, and like the Motorola One Vision it uses quad-pixel technology to let more light in, for improved low-light performance.

Way down at the bottom end there’s the Moto E6 Play, which is set to retail for less than £99 (roughly $130/AU$185), although we don't know the exact price yet. This has a 5.5-inch HD+ display with an 18:9 aspect ratio, a 13MP main camera, 32GB of storage, a microSD card slot, a 3,000mAh battery, a fingerprint scanner (on the back) and facial recognition. Basic then, but on paper it sounds very reasonable for the money.

Finally, there’s the Motorola One Macro, and if that sounds familiar it’s because Motorola actually already announced this, but previously it was only announced for India. Now it’s hitting other regions including the UK and Australia, where it will cost £179 / AU$299 (around $230).

Its name comes from the presence of a macro lens, which can apparently get 5x closer to subjects than a normal lens, managing to stay in focus from distances of just 2cm. There’s also a 13MP main lens and a depth sensor.

Other specs include 4GB of RAM, an ‘AI chipset’ (which is apparently intelligent and battery-efficient), a 6.2-inch HD+ display with an 18:9 aspect ratio, 64GB of storage, a microSD card slot, and a 4,000mAh battery with 10W fast charging.

The Moto G8 Plus and Motorola One Macro will be landing in the UK on October 28, while the Moto E6 Play is slightly further out, as it’s landing in early January. In Australia the Motorola One Macro is available from October 25 while the Moto G8 Plus lands Ocotober 31. Availability and prices in other regions is to be confirmed but we'll update you if we hear anything.