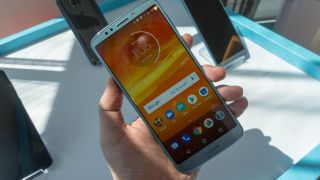 Chinese smartphone maker Motorola has been teasing its latest budget device, the Moto E5 Plus in India for some time and now, the company has confirmed that it will launch the device in the country on July 10, after being launched in Brazil earlier.

After posting teasers about the battery life and full screen display, Motorola has confirmed that the Moto E5 Plus will be launched in India as an Amazon exclusive on July 10. Apart from Amazon, the device is also expected to be available from Moto Hubs across the country.

The Moto E5 Plus runs on Android 8.0 Oreo and offers users a near stock Android experience. It features a 6-inch HD+ IPS LCD display with a resolution of 1440 x 720 pixels and an aspect ratio of 18:9. The display is protected by Corning Gorilla Glass.