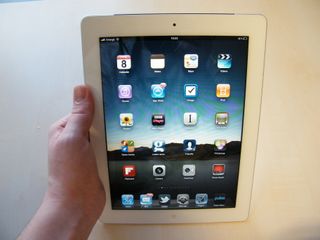 It's possible to both love and hate something at the same time.

The iPad 2 is a bit like that. It bestows you with the three p's - power, pleasure and prestige - whilst simultaneously holding back the features that could have made it the best consumer electronics product of all time.

So one month (and a bit) after the UK launch of the iPad 2, what's our long term verdict?

There's no doubt that the iPad 2 is a darn sight nicer than the original model. It's slimmer, it's lighter, it's got more grunt and it's got two, albeit pathetically mediocre, cameras.

With regards to those slight cosmetic changes, it's easy to overlook them. But it's only when you've been using iPad 2 for a while and then pick up an original model that you realise just how bulky and heavy the sodding thing is.

A lot of iPad 2 apps require you to be able to wield the device in one hand, something that's a lot more difficult to do with the original model – especially if you're trying to support it primarily with your thumb (which you are forced to do when holding it with the screen facing downwards).

So that's a big thumbs up for the aesthetic and ergonomic changes – on this score, we wouldn't swap iPad 2 even for 2 iPad 1s.

Let us also pay tribute to the increase in power of iPad 2 with its dual-core processor. Launching and running apps is a lot smoother now. Even though you're only saving fractions of a second at a time, the end user experience just feels a lot more slick.

Apps like Garage Band can be rather clunky on the first iPad, while they run smooth as you like on iPad 2.

And thirdly, there's those cameras. Don't get us wrong, we're very grateful for them. Cameras open up a whole new avenue for developers to, er, develop in. There are already boat loads of cool camera-related apps out there, from the throw-away fun of PocketBooth to the genuinely useful Word Lens.

However, a 0.7MP rear-facing camera. Really, Apple? Really? It's just an atrocious effort, even more so when you consider there's an Android tablet floating around out there (somewhere) with an 8MP camera.

Certainly, resolution isn't the be-all and end-all, but it's still quite important, right?

The iPad 2 is, in some ways, able to capture some decent images – but only when viewing on the device's own display. Stick those pictures up on a TV, a computer monitor or print them out and they're immediately exposed.

We don't want to use the iPad to take our high-res holiday snaps, but how easy would it have been to put a slightly better sensor in there?

Personally, I've never been much of a hardcore gamer. A casual one certainly, but my short attention span means I rarely complete a game on any platform.

This makes the iPad 2 the perfect games console for me. It's just brilliant.

The touchscreen interface forces games developers to make their titles easy to pick up and play. It can also make you feel a lot more engaged as you're interacting directly with the game itself. Add that to a raft of excellent games, many free, many others reasonably priced, and there you've got something to fill those 5 minute ad breaks when watching telly.

And finally, we come to the battle between iPad 2 and the Android 3.0 tablets of this world. You may not have ever seen one, but they are out there, somewhere - honestly.

We've played with lots of them, and even though they're all slightly flawed in their own unique ways, we've liked them all. Honeycomb is a fantastic OS.

It may not quite have the polish of iOS 4.3, but what it does do is expose your inability to make the iPad 2 your own, unique device.

That's the thing with our iPad, we don't really feel that it's ours - it's Steve's.

So in conclusion, after one month with it, we really hate the iPad 2. We hate it because it imposes limitations on you. It shackles you to iTunes. It's got a crap camera. But most of all we hate it because we just can't help loving it so much.

It's the drunk, wife-beating husband of our gadget collection. It loves us and provides for us, while being totally uncompromising in its abusive 'our way or the highway' attitude towards us.

There's absolutely no question that the iPad 2 is the most complete, functional and usable tablet currently on the market. We've tested them all, and it's simply the best. It may be only a small step forward from the original model, but it's still a decent step in the right direction.

At some point, the enormous potential of Android 3.0 is going to bear fruit. But until then, we're just going to continue to allow our cute little kitty to leave dead mice in strange places, leave muddy pawprints on our clean bed sheets and make bad things happen in our noses.

It's worth it because he's just so awesome to have around.