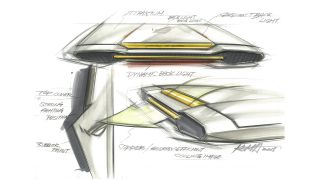 It's been a transformative year for Asus laptops, not to mention gaming machines. We've seen PC-grade processors and graphics chips, dockable desktop GPUs and even mechanical keyboards make their way into mobile gaming rigs in 2015.

But liquid cooling takes the cake for the craziest new implementation in gaming notebooks.

We never thought it possible, but the Asus ROG GX700 truly is the world's first liquid cooled gaming laptop. Aside from the sheer absurdity of the idea, the system Asus has put together is brilliantly insane.

Instead of stuffing the entire cooling system inside of the laptop, making it incredibly thick, the GX700 is a roughly inch-thick machine that plugs into, and works in tandem with, a massive, alien-like pod filled with the extra hardware.

When fully connected, the system's extra heat dissipation allows you to overclock the GX700's components and reach all new levels of performance not yet seen in even the most powerful laptops. That shouldn't be too hard even at base clock speeds, as the 17-inch gaming laptop comes packing an Intel Core i7-6820HK processor and, most notably, a desktop-grade Nvidia GTX 980 graphics processor.

In an interview with techradar, Asus ROG Global Marketing Director Derek Yu said Asus approached Nvidia in early 2014 for a new GPU with unprecedented overclocking capabilities to match the power of a desktop. The Taiwanese electronics firm wanted a graphics chip for notebooks that could handle overclocking up to 180-watts – by comparison, the Nvidia GTX 980M tops out with an energy draw of 157-watts without overclocking.

"The intention was to challenge people on what they envisioned a mobile GPU could be," Yu said. "At the same time, we have to come up with a thermal solution that matches this kind of requirement, so having a liquid cooling system has been part of the project from the get go."

Typically, liquid cooling systems are large and heavy, even with some of the smallest all-in-one solutions found in desktops. They all require multiple parts, including a pump and piping to circulate the liquid in addition to large, fin-style radiators to dissipate the heat. It's not at all surprising that there hasn't been a liquid cooled laptop before the GX700.

Asus tackled this problem by splitting the liquid cooling system in half. Rather than trying to fit all the necessary components inside of the notebook itself, the GX700 only has a few extra components built into it, including water-channels and water for the coolant to pass through. Meanwhile, the majority of the liquid cooling system's components, such as the pump, radiators and 90mm fans, are all found inside the dock.

"The water cooling section interacts with the existing heat pipes thermal system inside the laptop, so those two work in tandem together," Yu explained.

"It actually utilizes the current heat pipes that are connected to the important critical parts," he continued. "But now the water cooling part will take away, [and] offload the heat away from the system toward the radiators [on the dock]."

On top of cooling the laptop's most crucial components (such as the GPU and CPU), the system also helps put the entire system on ice – down to the storage modules and RAM. Naturally, the liquid cooling only kicks in when the laptop is docked with its massive pod.

Current page: The design of the first liquid cooled laptop

Next Page A closer look inside
See more Laptops news