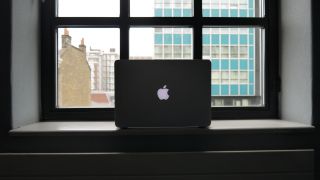 Apple hasn't wholly revisited its MacBook Pro design since 2012, when the Retina display model first released. If the recent spate of leaks and rumors are to be believed – the latest from Bloomberg's famed Apple reporter Mark Gurman – that changes this year.

Gurman's report – citing anonymous sources – reaffirms all of the rumors and leaks regarding a brand new MacBook Pro, including the strip of capacitive touch keys beneath an OLED screen and TouchID integration. Though, nothing in this report is said of whether the biometric sensor will be incorporated into the power button.

However, Bloomberg introduces a few new – albeit unsurprising – wrinkles to the MacBook Pro 2016 story.

It'll be thinner, stronger and faster

Surprise, Apple has somehow made its MacBook Pro even thinner, according to Gurman's sources. This is one of those details that we've honestly come to expect with each iteration of every Apple product – so much so that it'd be more of a surprise if the next MacBook Pro weren't thinner.

Bloomberg has also learned that the new MacBook Pro will house USB-C technology for faster data transfer and a slew of other connectivity uses, including charging. That means you may be searching for a new USB-C monitor to make the most of your new MacBook.

A source has also told the outlet that Apple has chosen AMD to supply an upgraded graphics option, implying that these laptops will house integrated graphics to start. (However, Gurman hasn't heard anything about Apple's CPU choice, though it's likely Intel.)

It's said that Apple chose AMD – its new Polaris chips, specifically – because of their thinness and efficiency needed to allow for a thinner MacBook Pro. It helps that AMD supplied the graphics option for the previous model, too.

One new sliver of news that might get people going? According to Gurman, Apple's considering releasing these MacBook Pro models in gray, gold and silver.

Don't expect to see it in September

Good, because this next bit of news might bum you right back out. One of Gurman's sources said that it isn't likely that Apple will debut the new MacBook Pro at the iPhone 7 debut event reported to be scheduled for September 7.

In that case, if we're hearing so much about these new MacBook Pros already yet we shouldn't expect to see them on September 7, that all but points to Apple throwing yet another event in October or November. The firm has done it before to release iPads, after all.

However, considering what we've been hearing about just how (not) big this iPhone revision is set to be, Apple might need to fill out a September keynote with some juicy MacBook Pro news after all.

Have you paid off your credit balances yet? Because Apple's about to make this holiday season yet another expensive one.