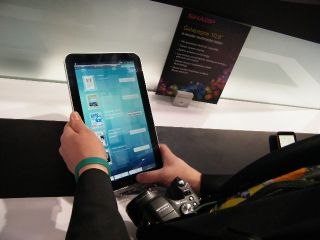 Sharp Galapagos tablet - big changes before it is launched

Sharp showed off its Galapagos tablet range at CES 2011 this week, offering a sneak peak at what to expect when the tablet is eventually launched later in the year.

Sharp showcased the tablet range in its keynote but wasn't quite ready to confirm whether or not the tablet will becoming to the UK with an Android OS or something that's Linux based.

Our colleagues at T3.com grabbed some Sharp Galapagos tablet video footage which you can watch below.

What was shown, however, was the look and feel of the devices on Linux.

Currently there are two size options for the Sharp Galapagos: 10.8 and 5.5 inch. Both have a 16:9 ratio screen and are plugged straight into the Sharp ebook store – the tablets we played with had the store as its home screen. The store offers books and magazines in the XMDF book format.

Linux based at the moment, the Galapagos looks likely to use Android when it is released in UK. The tablets have also wireless web connectivity.

The tablets to hold are fairly heavy but the design of the devices were pretty sleek.

The quality of the 10.8 inch's is WSGA 1366x800 and there's also the ability to share content between a number of other Sharp products.

There's no UK release date for the Sharp Galapagos so don't expect it to come to the UK till the back end of 2011.

Pricing is also to be announced.