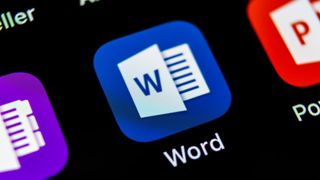 OneNote was first to receive a makeover, as MacRumors spotted on October 15, and the other Office apps have now followed suit.

"Go easy on your eyes with ‌Dark Mode‌," say the release notes for Microsoft's note-taking app. "Switch to ‌Dark Mode‌ in low light environments or whenever you want to increase the legibility of the OneNote user interface and the readability of your notes."

However, not all early adopters are fans. While menus and buttons in Excel appear black, spreadsheet cells remain white, which means there's a sharp contrast that can be harsh to look at – and that's just one example.

Word documents also appear white against dark toolbars, and there are some inconsistencies in how colors are used in different apps, though hopefully Microsoft will resolve some of these issues in a future update.

After your Office apps are updated, you'll find that they respect your system-wide color preferences, so if you have dark mode activated already, your apps will change automatically.

There don't appear to be toggles for changing the color of Microsoft's apps manually, so sadly you're out of luck if you'd prefer not to use your device's settings. Perhaps an option will be added in future, if Microsoft sees sufficient demand.