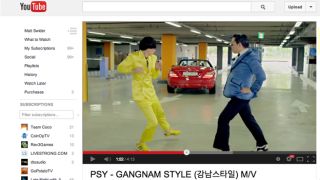 Really? You watched Gangam Style that many times in 2012?

This was accomplished by tapping into fiber optic cables used by the internet at large, according to an NBC News report featuring the latest leak via Edward Snowden.

The GCHQ presentation, dubbed "Psychology A New Kind of SIGDEV" (Signals Development), ended up in Snowden's hands because British spies were showing the tactics to their American counterparts.

With access to such data, British spies are said to have been able to analyze YouTube in real time to figure out which videos were going viral before protests broke out in volatile countries.

This reportedly worked well in Bahrain. Two past Bahrain protest videos went viral again on February 13, 2012, leading to a heads-up of anti-government protests that took place the next day.

A year earlier, without a spy program on the scale of Squeaky Dolphin in place, UK intelligence agencies - like all Western intelligence - missed the Arab Spring uprising of 2011.

Both Google and Facebook took issue with the intrusive collection of their users' data, while a a GCHQ spokesperson told NBC News that it was working within the law when doing so.

Facebook and Twitter have since encrypted their data, which would prevent governments from simply tapping into and collecting data via fiber optic cables.

Google, however, hasn't encrypted YouTube and Blogger data, although it has rolled out encryption for several of its data-sensitive products over the last several months.

With Snowden reports putting the "tell" in "intel" with leaks of programs like Prism and Squeaky Dolphin, intelligence officials are claiming that lives are being put at risk.

Privacy advocates are saying something slightly different: the internet's credibility is what's in danger.