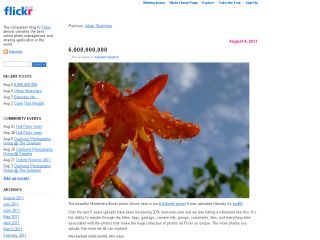 Flickr was established in 2004, before being sold to web giant Yahoo! a year later.

Over the past five years, uploads to the site have increased 20% year on year, with the 6 billionth photo uploaded on Monday by user eon60.

The photograph was taken on a Panasonic Lumix LX3, a premium compact. The picture shows a Montbretia flower which was taken on the same day as it was uploaded. The LX3 was a popular compact camera, which saw an update in the form of the LX5 last year.

Since featuring the photo in the Flickr blog, it has been viewed over 10,000 times and attracted more than 150 comments.

Flickr allows users to give uploaded photos titles, tags, geotags. EXIF data, which shows information about the camera, including camera brand, lens and any post-processing, is automatically uploaded, while other users can favourite or comment on images.

The most popular camera on Flickr is not a dedicated camera, but the Apple iPhone 4, with the 3-year-old Nikon D90 coming in second. The pro-level Canon EOS 5D Mark II makes it into third place.