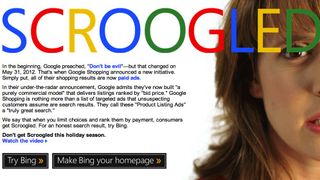 In a new war of words and websites, Bing launched a "Don't Get Scroogled" campaign Wednesday, complete with a site dedicated to pointing out how Google Shopping is screwing over everyone by listing search results partially based on how much merchants paid to rank.

"[We] want to alert you to what Google has done with their shopping site right in time for Christmas," Mike Nichols, corporate vice president and chief marketing officer at Bing, wrote in a blog post.

"Instead of showing you the most relevant shopping search results for the latest coffee maker you're looking to buy mom, Google Shopping now decides what to show you – and how prominently to display what product offers they show - based partially on how much the merchant selling the product has paid them."

A Microsoft spokesperson elaborated on the purpose of the campaign to TechRadar.

"Google operates a 'pay-to-rank' model," the spokesperson said. "That means Google Shopping looks like regular links, but they're actually paid ads for retailers.

"Since 50 percent of shoppers use search as the place to begin their hunt for gifts, using Google Shopping can prevent you from finding the best deals and selection."

Scroogled was launched to raise awareness of Google's practices and to warn consumers as they shop for the holidays, the spokesperson added.

According to the Scroogled website, it was after a May 31, 2012 announcement that Google Shopping's search results turned into paid advertisements.

Google Shopping finished its U.S. roll out on Oct. 17, 2012 and, according to an announcement on Google's Commerce page, transitioned Google Product Search to "a purely commercial model built on Product Listing Ads."

"Ranking in Google Shopping, when the full transition is complete this fall, will be based on a combination of relevance and bid price - just like Product Listing Ads today," the Commerce post read.

"This will give merchants greater control over where their products appear on Google Shopping."

Additionally, Google said that commercial relationships with merchants will provide better, more up to date product data that leads to better shopping results for users and higher quality traffic for merchants.

Google Commerce will roll out to the U.K. and Australia in February 2013.

It's the pay-to-rank practice that the Scroogled campaign aims to point and snuff out as consumers can easily mistake an advertisement for "an honest search."

"In short, we think that too many shoppers who use Google for their shopping searches are getting 'Scroogled' when they should be getting fair, honest, open search.

Google's actions are particularly egregious, Nichols and the Scroogled website point out, because Google (and Bing) were founded on trust.

Google's founders even called search engine bias based on payment "partially insidious" when they started the company, Nichols wrote, but that principle has been washed down the drain as payment has become another factor in ranking search results.

"We won't let who pays us for ads or other services affect what you see in your search results," Nichols promised. "Search results are one thing; ads are another."

The Scroogled site is painted with Bing-liness, and provides right-there links to "Try Bing" and "Make Bing your homepage."

Microsoft is even offering to let those who've "been duped by a bad search" vent on its Facebook page.

It's a clever campaign colored with the "look how evil they are" language of a social movement, and even if its points are valid, Scroogled is really nothing more than a big advertisement for Bing.

TechRadar asked Google for comment and will provide an update if and when more information is received.