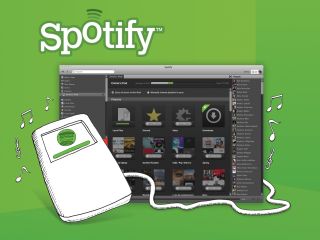 Spotify has announced new features that will be considered a bold threat to Apple's iTunes software, including a download service and the ability to manage your iPod.

The latest Spotify update brings major upgrades, including 'seamless' management of an iPod, a Spotify download service and the roll out of the Spotify Mobile App to non-paying customers.

"You've… said you're listening to a huge amount of music on your iPods, and that getting your Spotify playlists onto them as MP3s has been a serious hassle, forcing you to juggle multiple music players," said Spotify's release. "That's until now…

"As of today, Spotify is making it possible for everyone to take their playlists with them in one lean, green music machine."

Managing your iPod is obviously a key addition, with the Spotify computer client able to recognise the device and sync music to the device – something that previously only iTunes has allowed.

"Simply connect your iPod to your computer via your USB cable and watch it magically appear in the new 'Devices' section of your Spotify sidebar.

"Sync all the MP3s contained in your Spotify playlists to your iPod, and purchase the rest through the all new Spotify download service."

And the addition of a download service, allowing the purchase of music, is another broadside for iTunes.

"Spotify's new MP3 download service makes it possible to own your playlists in one easy step," adds the statement.

"By introducing a range of MP3 bundles, we've been able to offer you some of the most competitive prices available - from as little as 50p per song."

Interestingly, Spotify will also let its mobile app be used by people who use Spotify Free rather than the premium services. This is an abridged service, however, that only allows you to sync MP3 playlists you own with your device or manage your playlists offline.

"As of today, everyone can download the Spotify Mobile iPhone and Android apps to wirelessly sync your MP3 playlists in Spotify from your computer to your phone," added Spotify.

"Fire up your mobile app and see your phone appear in the 'Devices' section of the Spotify sidebar, ready to rock and roll.

"No cables required! And did we mention it's now possible to wirelessly sync these playlists to your iPod touch?"

Of course, attention will now turn to Apple, a company that has been notoriously quick to prevent people circumventing iTunes with their devices in the past.

Indeed, it is only recently that the Sony Reader app was barred from the App Store because you could circumvent the iTunes purchase protocols.

Regardless, this is a hugely fascinating play by Spotify, as it looks to establish itself on a global level.

Daniel Ek, CEO & Founder of Spotify, said: "From today, Spotify really is the only music player you'll ever need.

"Our users don't want to have to switch between music players, but they do want to take their playlists with them wherever they go, on a wider range of devices, more simply and at a price they can afford.

"Now we've made that possible on one of the world's most popular consumer devices."