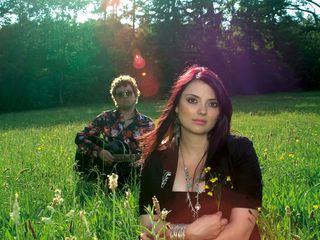 Georgia Wonder are fast becoming an internet phenomenon. From being just another band lost among countless others in 2002, they've pioneered innovative and creative ways to use the internet to attract attention and create a sense of community with their fans.

Without a record deal, PR company or any of the other normal music industry support, they're attracting not just fans but others who simply want to help. They've even toured with Simply Red.

After a successful career writing jingles in the late 1990s, Julian Moore – the song writing half of Georgia Wonder – began to think about putting together a girl band. "I thought at the time that I'd put together a commercial band and write for it, package it, get a record deal in the same way that you'd put together an act like the Sugababes," he says.

A vocal coach friend sent along some potential singers. One, however, didn't fit the mould. "She said, 'You've got to meet this Stephanie girl. She's not going to do as she's told but she's got an amazing voice.' So Steph [Grant] turned up, having a cigarette outside my house, trying to size me up.

"I actually had some songs I didn't know what to do with. So I thought why not ask her to try singing one. They're proper songs instead of something more manufactured. She kept coming round and singing stuff. The whole idea of me doing a commercial band went out of the window and I decided that I'd rather be writing music I care about."

Pursuing something more meaningful meant going it alone. But this wasn't easy: getting noticed without a record company plugging them and providing their marketing needs would lead the duo to develop innovative uses for emerging technologies.

"When we first started," says Moore, "getting a web page was the first thing you had to do. When I put the first web page together, I looked at Joomla and thought 'well, no one else is going to make us a website; I'm going to make us a website'. So, I spent all Christmas reading about stuff like that and by 2 January I launched our first website. At the time, having your own site was still quite exciting, but I didn't know what to put on it, and couldn't attract a lot of people."

The social technologies we now take for granted were nonexistent at the time. "You couldn't talk on Twitter," says singer Grant. "You couldn't exchange notes on Facebook. The conversation couldn't spread. There was nothing to join the dots, so we were alone on a bit of an island."

What changed everything was the emergence of YouTube. "We were in Berlin a few weeks ago talking about DIY music to panels of people," says Grant. "I asked if anyone knew how old YouTube is. People thought it was six or seven years old. It's actually only four years old. It was a game-changer."

YouTube allowed Moore and Grant to upload a homemade video for people to see. "A video's a statement about who you are and what you're doing," says Moore. "As soon as we put a YouTube video up, people started taking notice."

Within three days of the video going up on YouTube, it was picked up by satellite channel Bliss TV and placed on heavy rotation. But the band still needed a way of spreading the news about their debut CD to potential fans.Luckily, a chance encounter with a book would provide the answer.

Current page: Breaking through with the help of YouTube