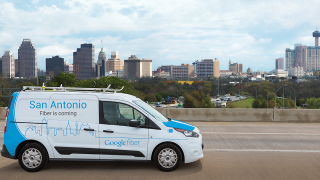 Google says its Fiber internet service can deliver speeds up to 1Gbps, while the average internet speeds in the US average about 12Mbps.

It is already available in Provo, Utah, Kansas City, Missouri and Austin, Texas, but Google says the roll out to San Antonio will be the biggest for a city, yet.

"We'll work closely with city leaders over the next several months to plan the layout of over 4,000 miles of fiber-optic cables - enough to stretch to Canada and back - across the metro area," Google said on its blog.

It's all about Fiber

Google does also have plans to further expand its Fiber service to other areas of the US, and while it hasn't made any announcements outside of San Antonio, you can see it's plans for new cities on this map.

Over the past few years, Google Fiber has seen competition come in the form of AT&T, which also has a fiber network in Austin, Texas, and Verizon's FiOS fiber optics network, which it developed back in 2007.

Comcast also has its own fiber service boasting 2Gbps that it will be launching this year, with plans to roll out a 1GB per second service in 2016 to most of its customers in 2016.