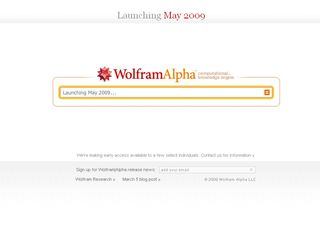 Wolfram Alpha may have faded from the headlines, but founder Stephen Wolfram insists that the computational search engine has come on leaps and bounds since it hit the public domain.

The logic-driven search engine arrived back in May to much hype about its potential to topple Google – something it was never truly designed to do.

However, Wolfram Alpha has changed greatly in the last few months, according to Wolfram, who has written a lengthy blog post about the trials and tribulation of giving people correct information.

"…for us now the most valuable thing is seeing what doesn't work yet," wrote Wolfram. "Because that shows us what we need to add to Wolfram Alpha.

"There are several components. One is knowledge domains. Things people want that Wolfram Alpha doesn't yet know. The good news is that there's been very little that's come through that wasn't already somewhere on our to-do lists. They're long lists. But we can now be confident that they're good lists.

Semantics in search has always been a major frontier subject, and Wolfram acknowledges that translating what people really want from what they actually type is a tricky task.

"It's very interesting to see the kinds of queries that come into Wolfram Alpha, and how they're phrased," added Wolfram

"We're really seeing a new human language. Based on ordinary language, but without a lot of its niceties. Probably closer to the way people think internally.

"Wolfram Alpha is a bit like a child: it's being exposed to a new language, and it's got to learn from examples how to understand it.

"The good news, though, is that Wolfram Alpha is getting a lot of examples. Already a couple of orders of magnitude more than a child ever gets."

So how much has actually been added to the Wolfram Alpha code base? Wolfram admits he has been staggered by the sheer volume of material.

"I just looked up what's actually happened to the Wolfram Alpha codebase since launch. And I have to say that I'm quite astonished: it's grown by a staggering 52 per cent - adding well over 2 million lines of Mathematica code," he says.

"There have also been nearly 50,000 manual groups of changes to our data repositories over the past 3 months.

"It's hard to have a good metric for how many completely new knowledge domains we've added. But based on new source files, and new underlying databases, I think it's been between 10% and 15%."

Wolfram believes that the Autumn season – with students back at schools – will be the key time for Wolfram Alpha – adding: "These are exciting times.

"The vision of Wolfram Alpha is really working! With every day bringing new advances. Progressively building up the largest coherent repository of human knowledge ever assembled."

You can check out the changes for yourself by going to http://www.wolframalpha.com/