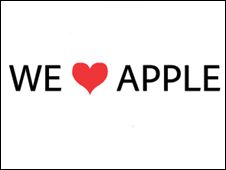 Adobe says it 'hearts' Apple... but does it? Really?

Adobe launches a new ad campaign today claiming to 'heart' Apple, although at the same time publishing an open letter claiming that Apple also threatens to "undermine the next chapter of the web."

Adobe's co-founders have published the aforementioned letter at the same time as running an adverting blitz in newspapers and on tech sites, running the tongue-in-cheek slogan you can see right here.

"While Adobe's Flash products are widely available, this does not mean they are open, since they are controlled entirely by Adobe and available only from Adobe," Jobs announced recently.

Jobs added that Apple believes that "all standards pertaining to the web should be open".

"We believe that consumers should be able to freely access their favourite content and applications, regardless of what computer they have, what browser they like, or what device suits their needs.

"No company - no matter how big or how creative - should dictate what you can create, how you create it, or what you can experience on the web.

"As the founders of Adobe, we believe open markets are in the best interest of developers, content owners, and consumers.

"If the web fragments into closed systems, if companies put content and applications behind walls, some indeed may thrive - but their success will come at the expense of the very creativity and innovation that has made the internet a revolutionary force.

"We believe that Apple, by taking the opposite approach, has taken a step that could undermine this next chapter of the web - the chapter in which mobile devices outnumber computers, any individual can be a publisher, and content is accessed anywhere and at any time."