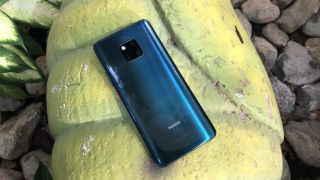 Most eyes may be on the Samsung Galaxy Note 10, which is set to launch today (August 7), but that’s not the only major phone on the horizon. The Huawei Mate 30 range is also in the works, and leaked case renders have given us a good look at the possible design.

Most phones go for a square or oblong camera block, so this is a bit different if accurate – which it might well be, as we’ve seen a similar design leaked previously, although the actual layout of the lenses differs here, and some earlier leaks show a more rectangular shape.

Moving on to the front, that’s shown in both cases as having a notch at the top, but very little bezel. The notch is larger than on the Huawei P30 Pro and looks to house multiple cameras or sensors. That's something we've seen leaked before.

It’s also worth noting that the Huawei Mate 30 Pro as shown here appears to have less rounded corners than the standard Huawei Mate 30.

Other details include what look to be speakers on both the back and bottom edge, and in the case of the Huawei Mate 30 there appears to be a headphone port, but this is lacking on the Mate 30 Pro.

This should all be taken with a pinch of salt, as while it’s probably our closest look at these phones yet, various aspects differ from earlier leaks – beyond the rear camera, we’ve also seen a punch-hole on the front in an earlier leak for example.

We might not know the truth for a while either, as the Huawei Mate 30 range probably won’t be announced until October. Still, we’re sure to see plenty more leaks and rumors ahead of that, and we’ll be sure to tell you about all the credible ones.