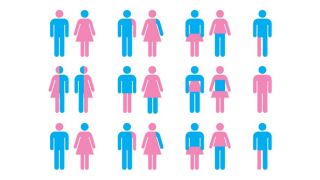 Da Vinci isn’t like other surgeons. He has four arms, for starters. That’s because he’s a robot, and he’s capable of even greater precision than human surgeons. That makes him particularly well suited to one of the trickier kinds of surgery: gender reassignment. As Wired reports: “the process people go through is at the pinnacle of medical science, a combination of chemistry and surgical art that anyone should be impressed by”.

From hacking hormones to steel surgeons, technology is helping to blur the boundaries between boys and girls. For some it means moving from one gender to another. For others, it means rejecting traditional gender binaries altogether.

The oft-quoted idea that we’re all born female isn’t true. We’re all made from the same template, and then a rush of hormones tells that template whether to make boy bits or girl bits – so the same material will form testicles in boys and ovaries in girls.

External genitalia are essentially the same until around nine weeks of gestation, at which point they begin to develop into male or female genitals. Sometimes that process gets it wrong and children are born with ambiguous genitals, something we call intersex, or they may develop physical characteristics that are at odds with their mental ones; we call that transgender, or trans for short.

Medical science has attempted to help intersex and transgender people since the 1920s, although sometimes it got it badly wrong: intersex children in particular were routinely given surgery based on nothing more scientific than a doctor’s guess as to whether they should have a penis or a clitoris, often with terrible psychological consequences.

As the years progressed, surgery became safer and more skilled. Sir Harold Gillies pioneered vaginoplasty, the creation of an artificial vagina from penile tissue, in 1952. He also performed the first gender reassignment phalloplasty (creation of a penis) in 1946, although the technique had been first used eight years previously.

The advent of microsurgery and the growing numbers of trans people coming out has led to ever more precise and effective surgical techniques, and that’s still evolving: some medical scientists believe that in the not too distant future it’ll be possible to bioengineer penises in the laboratory for implanting in patients.

The science is still in its infancy, but engineered penises were successfully transplanted onto 12 rabbits in 2008, and they were able to mate successfully. Others believe that uterine transplants will enable trans women to bear children of their own. If so, that will have been a long time coming: compilations from a uterine transplant killed Lily Elbe back in 1931.

You can learn more about the science of growing human tissue and organs in this video featuring Surgeon Anthony Atala of the Wake Forest Institute for Regenerative Medicine.

In addition to genital surgery there are other surgeries that can make a body more masculine or feminine: breast reduction for trans men assigned female at birth and facial feminization surgery and breast augmentation for trans women assigned male at birth. But surgery isn’t the only option. You can change your body with medicine too, and a growing number of people are doing just that via the internet.

We’ve long known that if you give female hormones to a male body it will feminise it, and vice-versa: oestrogen (the primary female sex hormone) and testosterone (male) change the way our bodies store fat, the thickness of our skin, the mass of our muscles and in the case of testosterone, even the pitch of our voices. Hormones are usually prescribed by health professionals, but cost (in the US) and astonishingly long waiting lists (in the UK) mean a significant number of people self-medicate.

Some call it body hacking or bio-hacking: they’re hacking their bodies to make them align with who they feel they are. Some of those people are changing from male to female, others from female to male, but a growing number of people don’t identify as either gender some or all of the time. They describe themselves using terms such as genderqueer, non-binary or genderfluid.

At the fringes you’ll find some gender non-conforming people in the biohacking, body modification community and the maker community: what could be more DIY than changing your own biochemistry? As Vice reports, there are even projects that aim to synthesize hormones using everyday substances and to publish the how-tos online.

Of course, whether home-grown or ordered from a reputable pharmacy any form of DIY medication is potentially dangerous, but for some people it’s worth the risk. And some don’t want to stop at hormones. Some biohackers believe that DIY gene therapy could enable us to change our bodies, defeat killer diseases and even keep the Grim Reaper at bay, and they’re bypassing drug regulations to try unproven, highly experimental and sometimes fatal DIY gene therapy.

Writing for The Establishment, Sam Riedel explains how something as innocuous as a photo app can have profound resonance for trans people. “The fundamental conceit behind FaceApp was one that appealed to the science-fiction nerd in me. I like to think of my own transition as biohacking, where I take nature’s chaos into my own hands and remake myself as I feel I need and desire to be.

“But whereas I’m doing all this blind, technology could change all that. What if smarter AI programs could accurately predict the effects of aging, transitioning, and so on, without relying on templates? What if they could help us be smarter about how we go about our biohacking, which is totally going to become a Silicon Valley trend?”

Technology’s role in the increasing blurring of gender lines isn’t just technical. It’s shaping attitudes too. When I was growing up, trans people barely existed in the media and terms such as non-binary wouldn’t emerge for decades. Now, we have trans and genderfluid pop stars and models, and entire online cultures for every conceivable kind of gender identity and expression.

Perhaps the most radical thing technology will do for men and women isn’t medical, but social: via the internet, an entire generation is challenging the gender stereotypes of a pink and blue world.