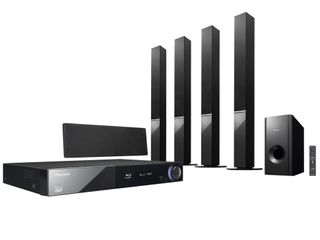 The new home cinema systems come in 'basic' and 'regular' flavours, with all four main systems including up to 1100-watt power output, with a de facto 5.1 speaker setup.

They also support 3D Blu-Ray disc playback, HDMI with Audio Return Channel (ARC) for audio output from your TV, web online streaming and DLNA connectivity. In addition, there are mini-jack and USB connectors for linking up your MP3 player.

Both the regular and basics series come in two different speaker configurations - with satellites in either "tall" freestanding or "compact" wall-mountable varieties.

The regular series, known as the BCS-717 with floorstanding speakers and the BCS-313 with compact speakers, adds iPod and iPhone compatibility via a cradle, WiFi connectivity, and an ultra-slim subwoofer.

In the basics series, the BCS-414 ships with floorstanding speakers, and the BCS-212 comes with compact speakers. In both of these the subwoofer is replaced with a fatter variety, and the Apple and WiFi connectivity is dropped.

The array of formats supported by all systems include DivX HD, MKV, JPEG, PNG, WMA, MP3 and AAC. They'll also rip your CD collection (if you still have one) to USB.

Connections to external devices such as games consoles and PCs are handled by two HDMI ports.

The systems are available now, starting at £299 for the most basic system, and stretching up to £499 for the "regular" system with floorstanding speakers.