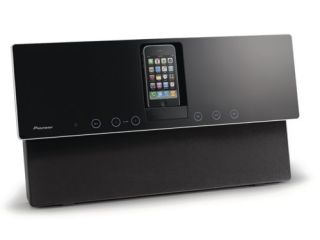 Pioneer has released details of its latest range of Kodo iPod dock setups, the XW-NAW1.

Bringing two 30w audio speakers, the docks have also been equipped with something called 'neodymium tweetermagnets' – which isn't the name of a death metal band but speaker technology which brings "rich, powerful and outstanding sound".

The speaker system is wall mountable and definitely looks the business.

According to Pioneer, it is a mere 83mm thick and has been equipped with a remote control so once it is hung on the wall, you don't have to keep getting up to change tracks etc.

The device NAW1 also has a component video out port, so you can also connect the system up to a TV to playback video.

And for those who don't want to wall-mount the thing, the NAW1 is also said to be portable enough to blast out songs on the go.

The Kodo XW-NAW1 has a UK release date of September and is priced at £199.