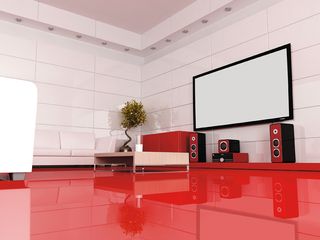 Choosing a good home cinema screen is a tricky business

But this doesn't mean we don't find screens as interesting, or consider them less important to the home cinema experience.

Far from it. One reason we don't review more screens is a practical one; installing and handling such large and cumbersome items can be a nightmare. But the other reason is that the screen market is so diverse, and associated so closely with the specific needs and room conditions of each user, that reviewing individual screens would seem too specific to be worthwhile.

The fact is, though, that if you get the screen wrong, then you will be selling your projector short, no matter how expensive it might have been.

Which type should I choose?

Start off by looking at the different types of mounting options available. There are two main approaches: fixed frame, where the screen is placed in a rigid frame and attached permanently to the wall, or 'roll-away', where it can be rolled up when not in use.

Within the latter category there are also various sub-options we'll consider in a moment. For people lucky enough to have dedicated home cinema rooms, the fixed frame approach will often be the simplest, since the screen doesn't need to be hidden when not in use. It's widely considered, too, that permanent screens stay more tautly stretched and thus produce more accurate pictures.

Roll-away screens are obviously a great solution for people trying to accommodate a home cinema setup in a room that also gets used for other activities, such as a living room. The most basic of these screens sit on a roller attached to, or hidden in, the ceiling and the user has to manually pull the screen down when needed.

Also very popular is the motorised roll-down variety, where motors drive the screen down into position at the touch of a remote control button. Some projectors carry 12V trigger outputs, in fact, so that they can activate motorised screens automatically when the projector is switched on.

If even having a slim roll-out screen housed on your ceiling feels too intrusive, a further, portable option is the pull-up projection panel. these come fixed inside carry cases that you stand on the floor, so that the screen pulls out of the top and is held upright by a collapsible support frame.

We've found that the more affordable floor-mounted types may not always stand completely upright or even flat. But the fact that you can put them in a cupboard when you're not using them is a practical benefit that will justify the performance compromises for some. rigidity and perfect flatness, so crucial to a good picture, are often one of the main reasons some projector screens cost vastly more than others, especially in the roll-away department.

Another key decision is which shape and size of screen you should go for. In terms of shape, there are three aspect ratio options: 4:3, 16:9, and 21:9. For home cinema enthusiasts, the old 'square' 4:3 screen approach is almost certainly a nonstarter these days. Which leaves us with 16:9 or 21:9.

If you intend to watch a lot of HD, you will probably be best off with a 16:9 screen that matches the ratio of HDTV material. If you're a die-hard movie fan, though, you might consider a 21:9/2.35:1 CinemaScope screen. After all, most big films now are shot in 2.35:1, and so the majority of Blu-rays are produced with that aspect ratio.

However, the situation isn't totally cut and dried. Blu-rays don't currently hold 'true' 21:9 masters (instead adding black bars within the picture data), and projectors don't have true 21:9 pixel ratios. So if you want a full 21:9 experience, you need a projector with a CinemaScope lens attachment – something which can add considerable cost to your projector setup.

If you really want the ultimate in Cinemascope clarity you could consider a curved screen like Stewart's CineCurve (below). These give a more immersive effect, focus light at your viewing position and compensate for the lens distortion you get with anamorphic lenses.

It's curtains for you

The existence of multiple aspect ratios explains another popular option: masking, where absorbent material can cover parts of the screen to change the shape of the visible section.

On a basic level, this can be done manually using curtains, although it is quite a faff. You can also install a motorised curtaining system external to the screen. But by far the most elegant solutions are high-end fixed screens that have motorised masking, where black borders of absorbent material can be electronically moved out from all four edges of the screen.

Such screens usually ship with preset aspect ratios and are selectable using single remote control buttons, but you can usually manually tweak the border locations yourself too.

To be really effective, the movable borders on these sorts of projection panels need to absorb light extremely well. And such screens are generally hugely expensive because of both the motors and tracking mechanisms involved. But they're generally an excellent proposition when built well enough, especially if you regularly watch 21:9 material, but don't want a CinemaScope lens or 21:9 screen.

Current page: How to choose a home cinema projection screen