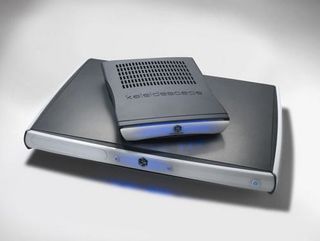 Kaleidascape's DVD upscalers are available now at a premium

Quality DVD upscalers are all the rage at the moment, as manufacturers insist that they are viable alternatives to Blu-ray.

One of the most standout player ranges we have seen – if just for the sheer price of the systems – was showcased at this week's CEDIA expo and TechRadar managed to get a look at it in action.

Made by Kaleidascape, the Ronseal-esqe titled 1080p Player and 1080p Mini Player are systems to be used in conjunction with Kaleidescape's much-praised media server – a 2TB hard drive that can store up to 150 DVDs.

Kaleidascape are so far the only manufacturers legally alowed to rip content from DVDs.

The newly launched players will up-convert your footage, "providing a viewing experience that rivals Blu-ray," according to its makers.

Michael Malcolm, Kaleidescape founder, chairman and CEO said about the new product: "These new Players have achieved our goal of producing beautiful high-definition video from the DVDs that we've all been collecting for years.

"And the compact 1080p Mini Player saves valuable space so customers can enjoy their movies and music in more locations throughout the home."