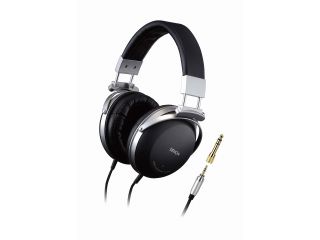 Denon has added a new set of high-end closed-back headphones to its expanding portfolio. The new AH-D2000 (£250) is described by the Japanese giant as ‘Reference Class’ and is clearly aimed at audiophiles.

The new model joins the company’s recently launched top-of-the-range £500 ADH-5000 headphones and shares a wide number of similarities. Both headphones will now go head-to-head with the high end’s market leaders, Sennheiser, Grado and

Ahead of the game?

Denon’s AH-D2000 has a number of key features that earn it high-end status. Frequency response has been extended up to 45,000Hz – for use with high-resolution, wide-bandwidth SACD and DVD-A sources – and the unit’s diaphragms use the latest Micofiber technology in a bid for a high-quality output.

Denon has also included what it calls an ‘Acoustic Optimiser’, which is said to balance pressure in front of, and behind the diaphragm, making greater movement possible. It’s this driver ‘speed’ that’s said to give the headphones an “airy and dynamic sound”, even when complex music is being played.

Magnesium has been used extensively throughout the AH-D2000’s design – both the frame and the capsules themselves employ the material ­– making the headphones super-light and very rigid. Denon says, “Every element of the D2000 has been engineered for maximum performance and a long service life”.