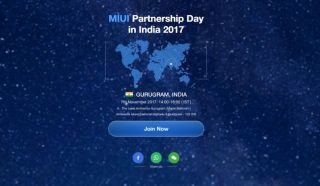 Xiaomi has announced that it is going to hold its first ever MIUI Partnership Day in India. The Chinese smartphone maker will explore collaboration opportunities with local developers across aspects like products, services, monetization and more.

Aimed at helping developers get familiar with Xiaomi’s custom skin MIUI, the MIUI Partnership Day will be held in Gurugram on November 7th. During the event, Xiaomi will try to find ways to better localize MIUI, after having launched features like Copy OTP, Dual Apps, Second Space, IRCTC ticket SMS detection and more.

India, the next growth market for Xiaomi

Xiaomi has led the Chinese smartphone industry for a long time now, but with its competitors like Oppo, Vivo, Huawei and others growing stronger, Xiaomi may be looking at aggressively expanding its footprint in India. The company has already launched some very useful localized features using its research in India. This new developer outreach could play a key role in the company’s ambitions in India, given how large and varied the Indian market can be.

Over the past few months, Xiaomi has also expanded its sales strategy from online-only to partnering with offline retailers and launching its own Mi Home Stores in different cities across the country.

In addition to developer outreach and offline sales, Xiaomi has also organized various meetups with fans to establish a way to communicate directly with its most enthusiastic customers. While this may not seem like a big deal for most companies, Xiaomi’s customers comprise of a great number of enthusiasts.

Given the immense potential of the Indian market, Xiaomi seems to be eager to capitalize on it; it remains to be seen if the company’s efforts are going to be enough to help it grab a bigger pie of the market share.