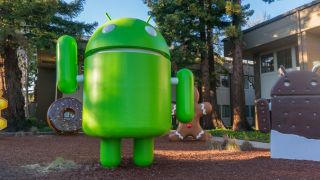 When the final beta of Android Q arrived earlier this week, it came with one major change: updated gesture navigation. This didn't go down too well with many members of the Android community, but with the final release of Q just a few weeks away, Google has told them it's going to stay that way – and what's more, people will like it.

With the old three-button navigation system, the left button lets you scroll through open apps, the center button returns you to the home screen, and the right button takes you back.

The main complaint involves the new back gesture, which presents issues for apps that already use that gesture for tasks like opening menus.

Developers can choose to deactivate the back gesture entirely, or just for a section of the screen if it interferes too much. For example, if users need to be able to swipe left and right to navigate through a gallery, the dev can disable the gesture for that portion of the display.

This change has been received badly on two fronts: firstly from users who generally dislike change and having to learn a new system, and secondly from developers, who are now being pressed to rework their apps in preparation for Android Q's imminent release.

You've got the touch

As The Verge reports, Google has responded to these complaints with a post on the Android developer blog discussing the thinking behind the new navigation, admitting that it hasn't been entirely seamless, and explaining why it decided to go ahead with it anyway.

The company says it's decided to focus on gestures because they can be faster and feel 'more natural', they're less likely to be triggered accidentally, and they mean apps don't have operating system navigation buttons cluttering their interfaces.

However, it also recognizes that they don't work for every user, take some getting used to, and may interfere with existing app interfaces – all the problems that have been raised by beta testers.

It says that it decided to press ahead because the gestures work well within reachable areas for both thumbs. Tapping the back button takes some awkward thumb-bending, and is much less comfortable than swiping from the edge of the screen. In testing, it found that the new gestures worked much better from an ergonomic perspective, and make one-handed navigation noticeably quicker.

The take-home message: it might take a few days (Google suggests up to three), but once you're used to the new navigation, your life will be easier. Developers will just have to work with the new standard, but Google has published a new guide explaining how to do it. Happy swiping (eventually).