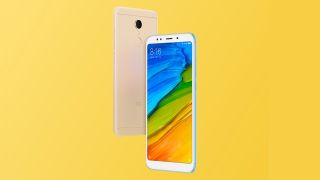 The Xiaomi Redmi Note 4 was launched in India in January this year. The device is powered by a Snapdragon 625 chipset and has a 5.5-inch full HD display. It was one of the most popular budget devices in the country and the company had claimed it sold more than 5 million units of the device.

The Super Moderator has said, “The wait is finally over, Xiaomi has finally decided to release the Redmi Note 5, wait!!! I heard its called the Redmi 5 Plus? No kidding?? There was a name change? Well yes folks, the 2 new Redmi Note sized phones are named Redmi 5 for the 5.7" and Redmi 5 Plus for the 5.99".

Changing the branding here may actually be a good move from Xiaomi. The company's Note series has seen exceptional success in the market, but it also means Xiaomi maintains three different ranges. Dropping the Note range could allow it to streamline this by putting Mi phones as its premium devices, while the Redmi series caters to all budget offerings.

In terms of performance, the Xiaomi Redmi 5 Plus is powered by a Qualcomm Snapdragon 625 SoC with 3GB/4GB RAM and 32GB/64GB internal storage, which is similar to the Redmi Note 4. The storage on the device can be further expanded up to 128GB via a microSD card.

Coming to the camera department, the Redmi 5 Plus comes with a 12MP primary camera with f/2.2 aperture and PDAF. On the front, the device sports a 5MP secondary camera with an LED flash. If we compare it with the Redmi Note 4, the major change that we notice is the addition of the front LED flash.