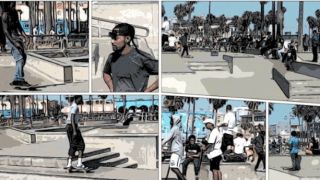 Google is experimenting with photography, and it's inviting us to join in on the fun.

Today the tech giant released three different apps focusing on experimental tech along the lines of object recognition, person segmentation, algorithms for stylization and image encoding, but for all that lofty language, they mostly resemble the one-trick-pony apps you often see on Google and rival Apple's app stores.

Storyboard is probably the most conceptually interesting, and it's an Android exclusive. The idea is that you shoot a video, and then the app will pick out what it thinks are the most interesting frames and use them to produce a single image that looks a bit like a movie storyboard or a page from a comic book.

As the name implies, Selfissimo! focuses on selfies. Once you give the app the go-ahead, it starts automatically taking selfies every time it senses that you've stopped moving, creating an experience that's a little like a photo booth or a personal fashion photo shoot. Unfortunately, you can only take photos in black and white. On the bright side, though, you can download it for both Android and iOS.

Interestingly enough, Google released the Scrubbies app solely for iOS. It's a video app that allows you a greater degree of control over the speed and direction seen in specific scenes, which in turn allows you to make video loops and replay key scenes at a preferred speed.

Google, a little awkwardly, calls the trio "appsperiments." The upshot appears to be that the features found in the apps could eventually make their way into Google's own native camera app if they prove popular and successful enough, and even now it's cool to see what's possible with current mobile camera technology.

Google also says these apps mark the "first installment" in a series, so other fun photography and video apps should also be on the way soon.