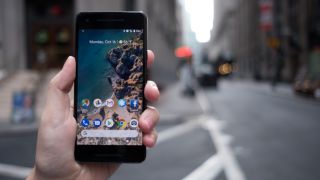 Google Assistant is going places. In the midst of MWC 2019, the year's biggest mobile show, Google has announced plans to integrate its smart assistant across a number of Google-developed applications.

Only days before the announced closure of Google's little-used messaging app, Allo,  it looks like one of its smarter features is living on with the Messages texting app for Android.

Much like the reply suggestions that appear at the bottom of email chains, users will soon find their Messages app will offer possible responses to text messages in an attempt to make texting a more seamless and convenient experience.

The Google Assistant AI will also bring up possible website links or Google searches users might wish to make based on their message chains – though Google says your messages aren't being read while it does so: "Information isn’t sent to the Google Assistant until you tap on the Assistant suggestion chips".

The Messages feature is expected to be rolled out "over the coming months" to Android phones.

Google Maps is also now compatible with voice commands, meaning users can ask Google Assistant to look up directions and alter routes in the app – and even message friends to let them know their expected time of arrival. The feature was already available in the US, but has now landed in the UK.

Google announced the new AI support in a blog post about their upcoming plans for the Google Assistant, including a dedicated button on new Android phones for quickly summoning the smart AI.

Google is clearly hoping to make the smart assistant a more accessible, and invaluable part of Android users' lives, though it currently doesn't plan to make this button 'remappable' as Samsung has done with its respective Bixby button.

The upgrades for the assistant also include support for six new Indic languages - "Marathi, Bengali, Tamil, Telugu, Gujarati, Kannada, Malayalam and Urdu" - and wider multilingual support for switching between two languages interchangeably. There's also a new Voice Typing application to translate user speech into text "in a natural way", even between different languages.