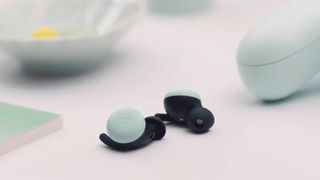 Google has revealed a brand-new version of its Google Pixel Buds at its annual Made by Google event.

The new Google Pixel Buds aren't set for release until the first half of 2020, but we were given a sneak preview of the true wireless earbuds at the event, with more information to be released in "the coming months".

They'll cost $179, which works out at around £140 / AU$265 based on current conversion rates – so in the US the new Pixel Buds are more expensive than the Apple AirPods, which are one of the most popular true wireless models on the market.

All of our Made by Google coverage:

According to Google's senior vice president of Devices & Services, Rick Osterloh, the upgraded earbuds come with an incredibly long-range Bluetooth connection, making it possible, for example, to leave your phone in your locker at the gym and still be able to listen to your music wirelessly.

Google says the buds' connectivity is so far-reaching that you could leave a distance the length of an American football field between your device and the new Pixel Buds – for non-gridiron fans, that's 100 yards (around 90 meters).

Unlike their predecessors, which featured a neckband design, the new Pixel Buds are true-wireless – that means Google has cut the cord between the earbuds, as on the Apple AirPods, or the Samsung Galaxy Buds.

Like the original Pixel Buds, you get hands-free access to Google Assistant, which you can summon using your voice.

Battery life is the same as the Apple AirPods: five hours with the buds alone, and "up to 24 hours" with the wireless charging case. That's not the best battery life we've seen for earbuds, but it should be enough to get you through your commute with juice to spare.