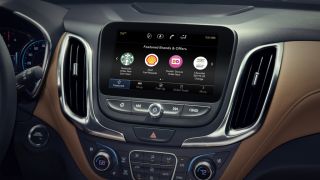 The car is changing. There’s no two ways about it; with the move towards electric vehicles, and the rise of automation, the way we interact with motor vehicles is set to shift dramatically in the coming years.

General Motors (GM) has released a new feature called Marketplace that marks the beginning of a new era: driving-as-retail. You will now be able to use your ‘infotainment’ system to make reservations and purchases at select partner organizations.

In the promotional video, you see a Chevy owner making an advance Dunkin Donuts order for his morning coffee, reserve a table at TGI Friday’s, and get directions to a gas station.

Of course it makes sense that once cars started connecting to the internet that we were going to see more content appear on the screens in our dashboards. Given that the rise of self-driving cars means we'll soon be a captive audience with no actual driving to distract it's unsurprising that companies would want to get in on that action. But there’s something about it that sits at-odds with the idea of what a driving experience is.

Obviously, not everyone experiences life in the same way, and for some, driving is purely a way of getting from A to B in the shortest time possible. Being able to book a parking space for your arrival would be a great use of your time and very convenient.

But for others – and we imagine this is many drivers – the time in your car is one of the few moments in your day where you can just think, without something being asked of you or being sold to you. It seems a shame to lose that.

“Rather than having somebody have to – if they’re going to engage on their phone – pull over and get in park while they’re doing it, which causes [them] to lose valuable time, or even worse, [creates] the temptation to try to use their phone while driving, which is something that we definitely don’t want… we believe in doing everything we can to make [retail] available, while making it safe while in motion.”

And for those that do want to shop on the go, it does make sense to try make that safer – we’re just not sure that looking at a screen on your dash is any safer than looking at a screen in your hand. It feels to us like a feature that serves the retailer more than the driver right now.