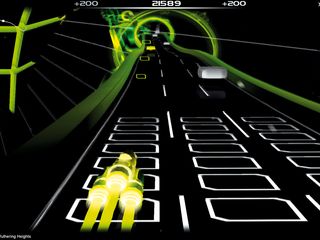 Audiosurf was a big hit on Steam

Is PC gaming dying, changing or growing? Anyone who answered dying, go and stand in the corner. If you answered either changing or growing, have a biscuit and feel proud of yourself. That said, every man and his blogging dog seems to have their own pet theory on the state of PC gaming, and that can make it wildly tricky.

Compounding this is that 'PC gaming' has become an astonishingly broad term. Are MMOs, for instance, a mere part of PC gaming, or do their players' tendency to stick with one game for years now make them a separate industry of their own? Should the independent developers churning out inspired Flash games and mods be lumped in with the mega-budget Need For Speeds and Crysises of this world?

Think beyond the box

So while, yes, retail sales of most PC games in plastic boxes may not be in the rudest of health right now, PC gaming as a whole is expanding. Visit Kongregate or Newgrounds and you'll leave with a justified impression that there's more people currently making PC games than ever before.

Meantime, Google ads on a clutch of gaming sites reveal this unending slew of MMOs you've never heard of. Some are diamonds in the browser-based rough, others are soulless grinds, but they're all out there making money even when the PC games shelves on the high street are increasingly shrunken and dust-covered.

It's painfully easy to draw the worst conclusions from this: the PC is the Latin of the gaming world. The immediate response to such doomsaying is that, while NPD have been the go-to guys for game sales figures for years now, their numbers don't include digital distribution. So, no Steam, no Gametap, no Metaboli, no Gamersgate, no Impulse, no EA Store, and no ongoing MMO subscriptions either, for that matter.

Any document of the state of PC gaming that doesn't reference the crazy moneypot that is World of Warcraft's 11 million-plus monthly global subscribers is hardly telling the real truth about the ol' IBM Compatible's health.

While paid game downloads are still a relatively new kid on the block, their impact can't be discounted either: that -14 per cent figure is all but meaningless as a portrait of PC gaming in 2008/9.

Stardock – publisher/developer of recent big sleeper hits such as Sins of a Solar Empire and Galactic Civilizations 2 – is a PC-only outfit that sees the merit of both forms of distribution: "On day one, digitally distributed games do better," reveals Stardock's CEO and founder Brad Wardell. "Then for the next six months, the boxed version dominates. Then after six months, the digital versions start to catch up again."

Valve's Doug Lombardi is similarly non-partisan: "Most of the data we've seen from Steam and from others who sell products at retail and online is that retail remains more or less steady and the majority of the growth seen recently, and projected in the years to come, is from digital sales/revenue. So, it's healthy and it's growing. We don't look for retail to go away, but instead see online as a multiplier for sales overall and a vehicle for creating better products and services."

Of course, for as long as retailers are still earning them good money, slump or not, any publisher would be mad to call them extinct just yet. What is clear is the download market isn't some tangential newcomer anymore: it's big business, and a major signpost as to the future of the PC.

A recent poll of gamers' buying habits on RockPaperShotgun revealed that a whopping 47 per cent of them were regularly purchasing downloaded games – while admittedly that's a survey of a fairly passionate group of PC gamers rather than the unwashed masses, it still suggests those fearmongering NPD reports are pretty worthless in their current state. "In just under four years," says Lombardi, "Steam has grown from zero to 15 million accounts. And our installed base is still growing rapidly as more core and casual games are added to the offerings."

When we asked him if the day is coming when Steam might house any game you care to name, he offered this: "This holiday Steam had Call of Duty: World at War, Spore, Far Cry 2, Fallout 3, Left 4 Dead, Football Manager 2009, World of Goo, Dead Space, Grand Theft Auto IV, and many more. For the most part, I think you can make that statement now."

Meantime, Good Old Games is a thriving new home to cheap retro PC games, emphasising that, unlike the consoles, this is a platform with a vast history. Given its game library is in the millions, it's not going away any time soon.

Next Page The effect of piracy
See more PC news