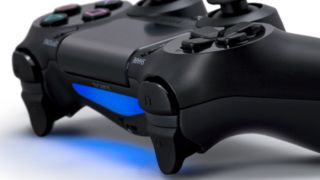 Hey, at least you can dim it now

Sony caused a lot of fuss when it confirmed that there would be no way of turning off the PS4's DualShock 4 light bar (one of its main purposes right now is to distinguish individual players), but do you want to know why it was really put on there? Because of Project Morpheus.

Jed Ashforth, Senior Designer at Sony Computer Entertainment Europe, told TechRadar that Sony's virtual reality superteam ensured the tracking light was put into the controller - though everyone had to keep quiet about its main purpose.

"The tracking light… it was our department that said we need that on," said Ashforth. "It was for tracking for VR."

"And when all these things were coming out six months ago and everyone was going 'it's reflecting in my TV,' we were going 'oh no' because we couldn't tell anyone what it was for."

So there you have it. It wasn't just Sony channeling its inner Tron after all.