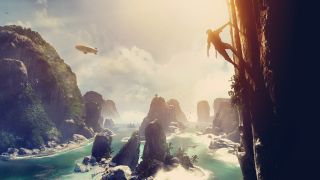 "Ok, I want to try this standing up," I say 10 minutes into my demo. I feel a bit uneasy, but I want to do this properly – I want to feel like there's an actual possibility I might plummet to my death.

Crytek has been creating some buzz around its upcoming virtual reality game Robinson: The Journey, but it's also been working on another VR project, which I'm currently playing: The Climb.

The Climb is a rock climbing virtual reality game that mimics the real experience of scaling rock faces and holding on for dear life. It's exclusive for VR, and will also only work on the Oculus Rift (sorry Vive).

Crytek has been working on a lot of virtual reality prototypes, but The Climb is going to make it into a fully-fledged game. That's largely thanks to the fact that several members of the Crytek team are climbing enthusiasts, and helped turn the prototype into something that felt authentically terrifying.

When it launches – no release date or price has been announced yet – players will be able to use the Oculus Touch controllers to make their ascent, but for our demo we used an Xbox One controller.

The controls were pretty straightforward: tilting the gamepad and headset caused my virtual character to lean/look in the desired direction; each trigger moved the corresponding hand; the A button made me jump; and the bumpers are used to chalk your hands (forget to do this at your peril). It's a clever way of solving the input problem without using Oculus Touch.

Then it's a case of moving on up with your two floating hands, but there are several different routes to the top – and it's tough. Going from one hand hold to the next requires a fair amount of precision, and in cases of leaping from one rock face to another, a lot of stomach.

And yes, missing that important hand hold and plummeting to certain death will make your stomach drop.

The demo I tried was set in a generic Asian mountain range where a sunset was casting an orange glow across the rock face. Graphically, it looked fantastic running on the Oculus Rift, although the obscured distant mountains were another reminder of the Rift's current depth-of-focus problem (the inability of our eyes to change focus between objects at different distances).

But everything closer than that looked great, running at a silky 90 frames per second, and looking down certainly made me feel uneasy. You won't see your legs, though; your virtual hands are the only part of the anatomy that's visible. "If you open up that can of worms, you've got to deal with it as another thing," said Esteves.

I'm not particularly scared of heights, but I definitely felt a few butterflies in my stomach when I looked down and realised the depth of the drop – especially once I'd decided to stand up.

The controller might be a reminder that it's all just a game, but when it works with Oculus Touch ("Oh yes, the Oculus Touch version is coming along nicely," says Esteves) you probably won't even give the gamepad a second look – unless you need a reality check.

"We've had hundreds of people play this and there are people who are really afraid of heights," Crytek Creative Director Patrick Esteves told us. "And usually they start, they look down, and they decide it's not a game they want to play.

"But quite often they continue playing and actually climb faster because they want to finish it as quickly as possible."

Perhaps an experience like The Climb could even help people conquer their fear of heights. "We had a guy play it yesterday and he was literally shaking, but he loved it because he was trying to conquer his fear, but he knew it wasn't real," said Esteves.

"I wish there was a way of measuring how hard people grip the controller, because I've seen some people with a death grip on the controller, and I'll say 'Ok, we're done with the demo, I'll take the controller back', and their hands are not releasing it."

When The Climb launches as a full game it will feature multiple difficulty levels and different climbing areas. There will also be an asynchronous multiplayer feature, which will encourage you to beat your friends' climb times.

As for now, it's a solid reminder of just how terrifyingly real virtual reality can be. Most of my experiences with virtual reality so far have involved short-lived demos or prototypes. The Climb feels a lot more fleshed-out, and a game that's going to be even more enjoyable when working with Oculus Touch.