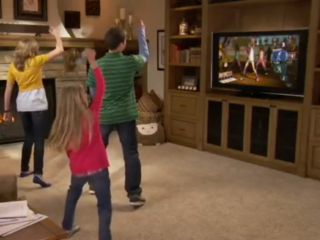 Kinect promises "You are the controller" - but do seasoned gamers really care?

Following the initial reveal of Microsoft's new motion and speech-control gaming tech at E3 2009 - then known to us as Project Natal and since re-named Microsoft Kinect – there have been endless questions from gamers and the gaming development community about how this new form of game control technology might (or might not) improve videogames.

Hardcore gamers tend to be amongst the most vocal critics of any new consumer tech in online gaming and tech forums. And, to be fair, while they are mainly young and, more often than not, male, they are always incredibly passionate about their games and any new technology that promises or threatens to upset the status quo.

Their thoughts, opinions and feedback are vital to how the games and products they'll buy and play (and bitch and worship online) are designed, developed and marketed.

So it is timely to ask whether or not the current online consensus amongst these (mostly) guys that Microsoft's Kinect is little more than a glorified Wii a fair judgement? Or is it a knee-jerk reaction to something they don't quite yet understand?

KINECTIMALS: David Braben's game looks cute, but who is it for?

After all, many of these Halo or Call of Duty-obsessed thumb bandits are also Microsoft's core market for the Xbox 360. Which also begs the question: Is Microsoft in danger of upsetting or excluding hardcore gamers with Kinect?

With this in mind, TechRadar spoke with a number of Kinect developers and publishers to find out their take on things.

Microsoft has not helped to appease the concerns of the hardcore gaming community, with its announcements of games for Kinect's launch later this year. Sure, Kinectimals looks very cool and promises to take the hugely-popular Tamagochi and Nintendogs pet sim concepts to the next level.

Not only that, it's being developed by the accomplished team at Frontier Developments, headed up by none other than Elite developer David Braben. In terms of a very cool game to pacify and entertain your kids (and you) for hours on end in the next few years, this one looks almost unbeatable.

And while we are on the subject of superstar development teams that are on Microsoft's Kinect roster, let's not forget Rare's Kinect Sports – which promises to do all of those things we wanted Wii Sports to do a few years ago, but to do them properly.

Ubisoft recently showed off its own line-up for Kinect at a preview event in London, at which the French publisher's Your Shape: Fitness Evolved, confirmed two things.

Firstly, the tech works. Really well. There may be a slight lag, but it is the best motion-control technology most of us have so far experienced on a games console. Even in slightly dark lounges, Kinect looks like it will work sufficiently well to let us play without glitches or annoyance at control failures.

Secondly, and most annoyingly, most of us still don't really want to play fitness games, no matter how well-executed or 'better than Wii Fit' they may be. Andrew Oliver, Founder and CTO of UK-based studio Blitz Games recognises that this first batch of Kinect games is going to attract the so-called casual market.

"Fully getting to grips with the capabilities of Kinect will take some time, but from the start we thought there were some obvious options that could be enhanced by motion sensing, such as fitness games, sports and dancing," says Oliver.

"Taking The Biggest Loser to Kinect was a great game to start with. We've created new levels of feedback for the player, so it's like having a personal fitness trainer in your living room.

"Many people have gone for obvious genres in the first round of games for Kinect, but now we're learning what it's fully capable of the possibilities are endless."

The real issue for gamers is that we were told at E3 2009 that Natal/Kinect was nothing less than "a revolution" when it came to interacting with games and we heard that over-used tagline "you are the controller" hundreds of times. So when might we see this promise fulfilled?

"The voice recognition adds another layer of immersion," says Oliver. "You can have conversations with on-screen characters or use it to select options and guide gameplay. The console can now 'see' and 'hear' the player so it's up to us, as game developers, to exploit this cool and very easy to use interface."

While most of Microsoft's E3 line-up for Kinect failed to excite the hardcore, there were a few third party titles on show at E3 that did show genuine promise. One of these was the 'movie karaoke' game Yoostar 2, which promises to be the Kinect game that puts YOU in the movies.

Yoostar 2 is based on a very simple premise. It lets you play your favourite movie characters in your favourite movie scenes and it scores you on your timing and acting ability. It does what green screens used to do, but without any need for anything other than an Xbox 360, a Kinect camera and a copy of the game.

YOOSTAR 2: A casual game that might well pull in the hardcore

From what we have seen of an early preview version, it does it very well indeed. The game has been given to Blitz Games to develop and should be out for Kinect in time for Christmas 2010.

It is a defiantly 'casual' game, but one which its creators and publishers genuinely hope that many hardcore gamers will also enjoy. Steve Stopps is Project Director on Yoostar 2 (and a number of other still-to-be-announced Kinect and PlayStation Move titles at Blitz).

Stopps informed us that his various teams have been working with Kinect for around a year now and that they have "seen it come on in leaps and bounds", adding that, "It does a very robust job… Microsoft has done some incredible work with the technology."

Right now, Yoostar 2 is still at the 'pre-alpha' stage of development. Even so, it's one of the best titles we have seen to really show off the true potential of Microsoft Kinect in the casual and party gaming space (and even though a small minority of highly vocal forum-trolling hardcore gamers might be almost pained to hear it, it is also a hell of a lot of fun).

You and your friends can now get drunk and then pretend to be in your favorite movie scenes. And then you can play them back to each other or share them online and laugh your ass off. After playing this for an hour that eternal debate over the casual/hardcore split in Microsoft's Kinect strategy pales into insignificance.

YOOSTAR 2: Acting up for the Kinect camera

"We have used the Kinect tech in Yoostar very differently to the ways in which most other games are using it," adds Stopps. "We have a number of Kinect games in development, but this is one of those that we're most excited about, because it uses the tech in a unique way.

"In terms of the interface, users simply move the cursor on the screen with their hands and the cursor snaps on to the nearby button on the screen. Then you just slide your hand across to select something. In terms of the usability testing we are doing, users really like it because it is a really nice, physical, tactile thing."

"Yoostar places you within your favourite Hollywood scenes. So what we wanted to do was to use Kinect technology to make that experience as easy to use and as magical as it possibly could be – so it's a jump-in and jump-out social experience."