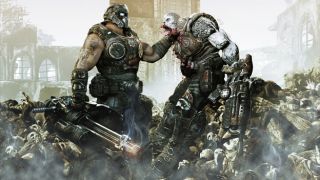 Microsoft moves through the Gears to snap up key franchise

Microsoft has announced the purchase of the hugely popular Gears of War games franchise from Epic Games, thus keeping it exclusive to the company's Xbox and Windows platforms.

The third-person shooter has sold over 22 million copies in its various guises, and was co-developed by Microsoft Studios alongside Epic.

Following the agreement, Microsoft announced the next chapter will be developed by Black Tusk Studios, led by former series producer Rod Fergusson. Epic is also being kept on in an advisory role to ensure a "smooth transition."

While there was little doubt a title would be part of Microsoft's Xbox One plans, the deal effectively kills the chances of a Gears of War game ever appearing on a Sony PlayStation console.

With little perceived difference between the physical gaming capabilities of the Xbox One and the PS4 console, both Sony and Microsoft have pinpointed the important of exclusive titles in the next-gen battle.

This deal will mean the Xbox One will have a new Gears of War exclusive to join the likes of the forthcoming Titanfall and Halo 5, alongside existing titles like Forza 5, Ryse: Son of Rome and Dead Rising 3.

Head of Microsoft Studios Phil Spencer wrote on the Xbox Wire blog: "It all comes back to our commitment to Xbox fans. The Gears of War franchise has a very strong, passionate and valued fan base on Xbox. Over twenty-two million units have been sold across all Gears of War titles worldwide, grossing over $1 billion dollars (US).

"This franchise, and these fans, are part of the soul of Xbox. By acquiring this franchise, Microsoft Studios will continue to offer them more of their favourite games and entertainment experiences from the Gears of War universe."