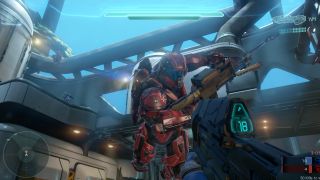 After we got our hopes up with the announcement that its Forge mode would be coming to PC, it's now been confirmed that we won't be seeing a full Halo 5 release on PC.

The news comes courtesy of PC Gamer's interview with a Microsoft spokesperson, who confirmed that there were "no plans" to port the Xbox One exclusive to PC.

However, the news isn't exactly surprising when you consider the series' difficult relationship with the PC in the past.

It would be crazy to claim that Halo: Combat Evolved was the first shooter to ever come to console. The Nintendo 64 had Goldeneye after all.

But Halo was the first game to bring the full range of movement of PC shooters to consoles. Unlike GoldenEye, Halo let you jump around levels with all of the grace of Quake 3, rather than just slide around them.

With the first Halo it really felt as though the PC's monopoly on massive blockbuster shooters had finally come to an end.

Bungie nailed the twin-stick controls, which remain a standard in the genre to this very day, and although hardcore PC gamers will be forever wedded to their mouse and keyboard combo, Halo felt simply great to play with a gamepad.

Combat Evolved did eventually come to PC, courtesy of Gearbox software, but its home was always on the Xbox, where its split-screen multiplayer ruined friendships worldwide.

Halo: Combat Evolved may not have come to PC at the same time as it hit the Xbox, but its PC release was at least uncomplicated. Halo 2's PC release, meanwhile, found itself caught up in two interrelated Microsoft initiatives – Windows Vista and Microsoft's Games for Windows Live initiative.

In essence, Halo 2's PC port was used by Microsoft as an attempt to force people to both upgrade their operating system and to invest in its new gaming ecosystem. Both were disliked by gamers at the time, and they continue to be remembered today as two of Microsoft's biggest missteps.

Halo 2 was later cracked to run on Windows XP, but by then the damage was already done, and the game never really found a home on the PC.

For years Microsoft refused to bring 2007's Halo 3 to PC, but in 2015 Halo fans worldwide finally got the news they'd been waiting for: Halo 3 would finally be coming to PC as a free-to-play title, exclusively to Russia!

Yes, you read that right. Almost eight years after its original release, someone at Microsoft decided that now would be a good time for Halo 3 to make its PC debut as a heavily modified multiplayer-only free-to-play Russian shooter.

It was a baffling decision, and one that modders quickly set to work reversing; but these restrictions, along with the sheer amount of time that had elapsed, meant that Halo again missed its chance to make its mark on the PC landscape.

When it comes to Halo 4 and Halo: Reach, the PC hasn't even been mentioned by Microsoft. We've had a couple of curt denials that anything is being worked on, but a full explanation has never been provided.

The only obvious explanation is that Halo has always been a console series first and foremost, and that's where it's traditionally been able to dominate.

This dominance may have slipped in recent years with the rise of Call of Duty, as well as Bungie's own Destiny, but it's important to remember that in its prime Halo was comfortably the biggest shooter on console, and the most-played game on Xbox Live by a significant margin.

Meanwhile the PC arena has always been dominated by a different group of shooters, such as Counter Strike, Quake, Unreal Tournament and Team Fortress. It's not that Halo can't compete with the big boys; it's just that the landscape is completely different, and out of Halo's comfort zone.

So it's not surprising that Halo 5 will probably never come to PC. The PC has never welcomed the series, and with Halo feeling increasingly past its prime things are unlikely to change anytime soon.