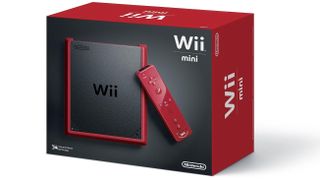 Well this one came out of nowhere, didn't it? It now seems as though the Nintendo Wii Mini is a genuinely real product and it will indeed go on sale in Canada in time for Christmas.

It first emerged that Nintendo might be considering launching a Wii Mini last week. Nintendo World Report received information from a major retailer claiming a Wii Mini would be launched on December 7.

The leak suggested a new, "compact" version of the original Wii console, bundled with a Nunchuk, Wii Remote Plus and jacket.

But after the internet debated the likelihood of such a product, Best Buy let the pussy out of the pouch by posting the product on its Canadian homepage. Nintendo responded immediately with the following statement: "The system launches in Canada on December 7th with a suggested retail price of $99.99. No announcements have been made regarding other regions."

According the Best Buy in Canada, "The Wii Mini has been completely re-designed from the base-up, resulting in a smaller console. The flat resting system features a manual release top-loading system, which will look to provide owners with a longer lifespan, since it relies on less electronics to power the loading and ejecting of discs.

"Similar problems led Panasonic and Sega to have to redesign some of their early systems. While Nintendo has never had similar problems with the Wii's original disc drive, this is a good safety measure in place to ensure you'll never have to experience that issue. At an introductory price of $99.99, the red and black Wii Mini system comes with the console, sensor bar and a Red MotionPlus controller with Nunchuk."

So that's 99 Canadian dollars then, which works out about the same in US dollars and about £62 in the UK.

The Canadian release date of December 7th is confirmed but it doesn't look like it'll be out anywhere else for the time being. You lucky, Mounties, you!

Specs are broadly the same as the current Wii, though there's no Gamecube emulation available and the system has no internet connectivity either, which means no internet gaming and no services like BBC iPlayer.

We can tell you're all REALLY excited about this one, so we'll bring you more when we have it.